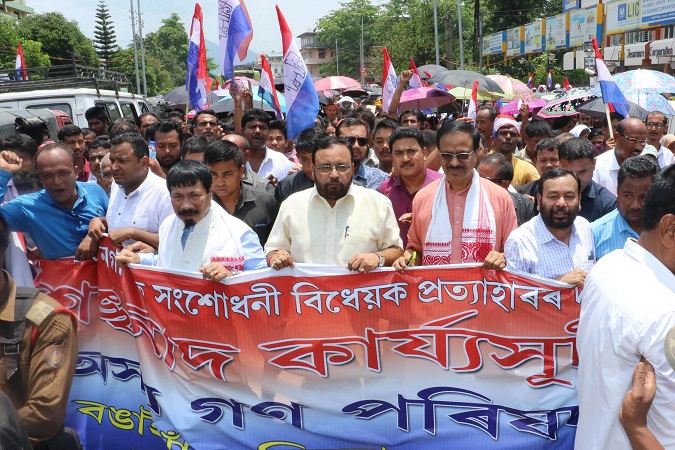 Asom Gana Parishad (AGP), a partner of the BJP-led coalition government in the State, on Thursday alerted the people of Bongaigaon to stand against the Citizenship (Amendment) Bill, 2016 by a symbolic Sankha Naad (sound of conch shell) during a protest programme organised at Gandhi Maidan here.

The AGP workers, its supporters and leaders took out a rally from the public field at Barpara on Thursday noon under scorching hot and reached Gandhi Maidan in the town, where a public meeting was held.

Addressing a gathering, the party leaders said they have been opposing the Bill only to protect the citizenship of those migrants who had entered Assam before 1971 and its indigenous people.

“We will not compromise on the Bill as our State’s demography would change if it turns into a law,” former chief minister and the party leader Prafulla Kumar Mahanta asserted.

The Shankha Naad programme would sensitize the people of Bongaigaon against the Bill, said IT Minister and AGP’s working president Keshab Mahanta.

“We have been opposing the Citizenship (Amendment) Bill even being in the Government,” said Agriculture Minister and party president Atul Bora.

Many other leaders and office-bearers of the party and its sister organizations were present in the programme.