Assam: Adil claims ‘factual error’ over Mukti Bhawan not making it to top 100

A still from Mukti Bhawan.

Assam actor Adil Hussain on Thursday claimed that the American based organization International  Cinephile Society had made some ‘factual error’ after the multiple award winning film Mukti Bhawan failed to appear in the organization’s compiled list of the top 100 films of the decade.

Among the 100 films that had been selected by International Cinephile Society, the crime film Gangs of Wasseypur is the only Indian film in the list.

The 2012 film Gangs of Wasseypur, which centered on the coal mafia on Dhanbad, occupies the 58th position in the list that had been compiled by the International Cinephile Society.

Adil on Thursday stated on Twitter that the film Mukti Bhawan got an approval rating of 100 per cent on Rotten Tomatoes which is an American review-aggregation website for film and television. 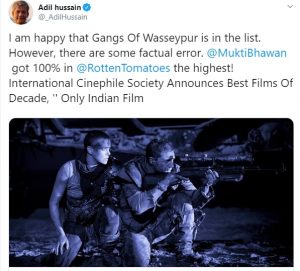 He tweeted, “I am happy that Gangs Of Wasseypur is in the list. However, there are some factual error. @MuktiBhawan got 100% in @RottenTomatoes the highest! International Cinephile Society Announces Best Films Of Decade, Only Indian Film.”

The film Mukti Bhawan is based on relationships and family written and directed by Shubhashish Bhutiani.

It’s a film that follows the story of a reluctant son who must take his father to the holy city of Varanasi, where his father believes he will breathe his last and attain salvation.

Adil’s character is forever flailing between the pragmatic and the profound, wondering if his father’s readiness for death makes any sense at all, and also questioning whether the hotel that promises salvation is itself haunted.