Assam: AASU takes out bike rally in Jorhat against CAA 2019 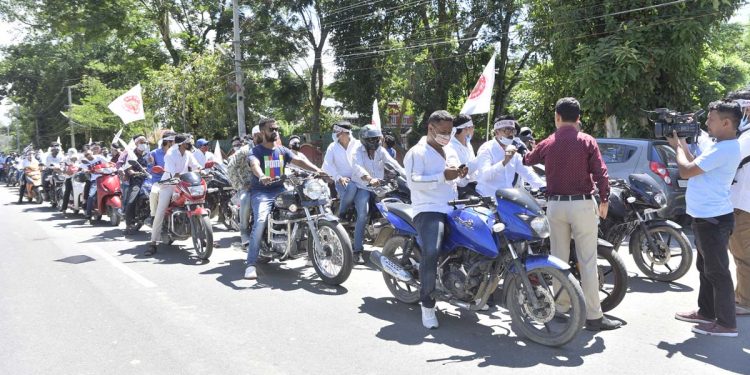 Members of AASU took out a bike rally in Jorhat on Wednesday demanding scrapping of the Citizenship Amendment Act (CAA) 2019.

The protesters, carrying the organization’s flag and placards, started the rally from Jorhat Stadium.

Passing through the main thoroughfares, they covered several kilometres of distance in the outskirts of Jorhat town.

The bike rally was flagged off by state organising secretary of the All Assam Students’ Union (AASU), Jul Khound.

The protesters shouted slogans against the BJP-led centre and state
government demanding withdrawal of CAA 2019 and sought full implementation of the historic Assam Accord, 1985.

Bordoloi later told newspersons that due to the outbreak of COVID19 pandemic the anti-CAA stir slowed down in the past few months “but now, the students’ body has resumed the agitation and will further intensify it”.

He said a series of different protest programmes and awareness drives on the threat posed by the CAA 2019 to Assam and the Assamese people will be undertaken soon.

“If we do not raise our voice against the legislation now, the day is not far when indigenous people of Assam will become a minority in their own state and lose their culture, language and identity,” Bordoloi observed.