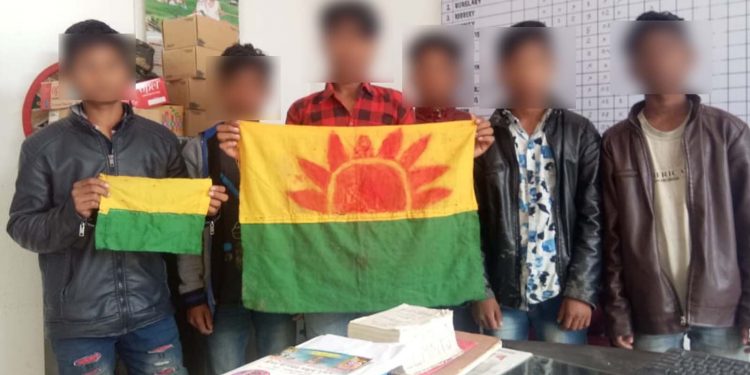 The minors who were picked up by Bordumsa police. Image credit - Northeast Now

Six minor students from Kujupather Sankardeva HS School under Bordumsa police station in Tinsukia district, who were allegedly planning to join the ULFA-, have landed in police net on Thursday evening.

The minor students, aged between 15 to 17 years, hail from Ritu Kathalguri, Kujupather and Miholiritu areas in Bordumsa.

A police official said, “The minor students were preparing to join the ULFA-I after completing their final examinations. Based on specific information, a police team picked them up on Thursday evening.”

The official said the police came to know about their plan to join the United Liberation Front of Asom-Independent (ULFA-I) through online conversation between the recruiter for the rebel group and the minors on the social media.

“Though we had sufficient evidence to pick up the minors to prevent them from joining the banned outfit, yet we wanted them to complete their exams as it matters a lot for their future,” the officer-in-charge of Bordumsa PS said.

“We were expecting them to reconsider their perverted design but they didn’t and as such we detained them as a preventive measure,” the police official said.

The minor were picked up from their respective residences located in the easternmost part of Assam in Tinsukia district bordering Arunachal Pradesh.

Based on a suo motto case (78/19) has been registered against the six minors at Bordumsa PS and they were produced before the Juvenile Justice Board, Tinsukia on Friday.

The police official said, “The Juvenile Justice Board will decided what step would be taken against the minors.”

The police have also recovered a flag from the possession of the minors.

According to sources, the minors are likely to be sent to the Observation Home for Boys, Jorhat, located at Lechubari.

A section of villagers blamed poverty-stricken life in the villages of the area as one of the causes of the minors’ plan to join the rebel group.

“They are hardly able to make their both ends meet and struggling hard for their basic amenities in life,” a relative of one of the minors at Kujupather, told Northeast Now.