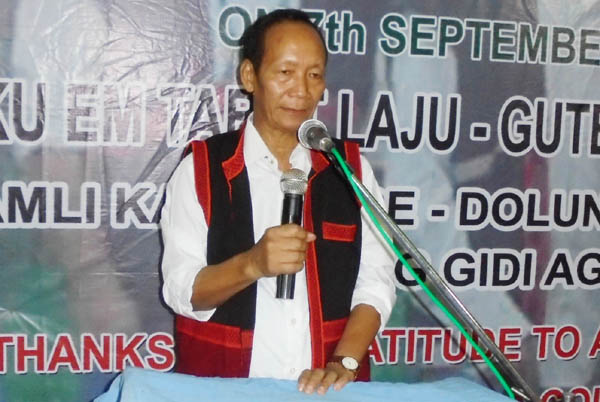 Arunachal MLA  Nari-Koyu LAC) Kento Rina has appealed to people of different ethnic communities of Arunachal Pradesh and Assam to maintain cordial relations and peaceful coexistence and take active part in the developmental works along the inter state boundary area.

MLA Rina made this appeal at the concluding Solung festival celebration at Nari town in Lower Siang district on Friday night, which was organized by Officer Staffs of Nari subdivision.

Rina said that festival belongs to particular ethnic community and it should not be mixed with religion or religious activities. It is also a good medium of exchange of ideas among different groups, he said.

Saying that festive celebration promotes unity and understanding among the community people, MLA Rina urged the youths to shoulder responsibility to preserve the ancestral belief and cultures for keeping their ethnic identity intact.

Rina told that his State government is giving priority to all round development of backward Nari-Koyu area, while it has taken steps to boost link surface communication at the inter-state boundary area.

“I have requested our Chief Minister Pema Khandu and other Cabinet Ministers to visit Nari-Koyu area and take stock of the problems faced by local people”, said MLA Rina while adding that government officers should work for welfare of the common people.

He also donated some amounts to the organizers for smooth conduct of their activities.

Addressing the auspicious occasion Nari Additional Deputy Commissioner (ADC) Bani Lego said that the ethos of Solung festival should not be limited to Adis, but it should be observed as ‘universal’ and adopted by other ethnic tribes. He also laid stress on eradication of the ‘superstition’ from the tribal societies.

ADC Lego also offered prayer to Kiine Naane (Laxmi devi) for bumper harvest of the crops and vegetables and well being of the human and domesticated beasts on the occasion.

Besides the regular schedules, Assamese song presented by ADC Lego and his wife Smt Taklek Lego, merry-making by Volcano Cultural Group of Nari and Solung Ponung by Pasighat Ponung Party were some special attraction of the festive celebration.