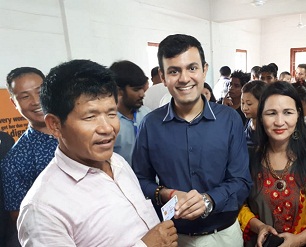 Northeast Now File photo: The Capital Complex DC Prince Dhawan seen handing over documents as part of the 'Government at your Doorstep' programme.

The ‘Sarkar Aapke Dwar’ (Government at your Doorstep) programme was organised at the Government Higher Secondary School at Ganga Village in Itanagar on Friday with more than 21 departments providing their services on a single platform. Hundreds of people from different walks of life came to avail the services of these departments.

The camp, organised by the Capital Complex district administration, aimed at resolving public grievances on the spot through delivery of Government services to the citizens. Capital Complex Deputy Commissioner (DC) Prince Dhawan visited every counter and interacted with the team members. He handed out important documents such as digitally-generated ST/PRC, LPC to the already approved cases and marriage certificates to the people. At the counter of the Food and Civil Supply Department, the DC handed over Smart Ration Cards (SRCs), the first of its kind in the North East. A total of 220 SRCs were issued in the camp.

A total of 126 beneficiaries were enrolled for Aadhaar while 142 benefited through awareness on domestic violence through Women’s Helpline 181, and 142 were given awareness on protection of women and children from domestic and any other form of violence by One Stop Centre. The DC said that the camp would be held every month and appealed to the citizens to participate and avail facilities through such events that have been specifically organised for them.