In another incident, a woman died after being drowned in the Lagun River near G-Extension in Naharlagun 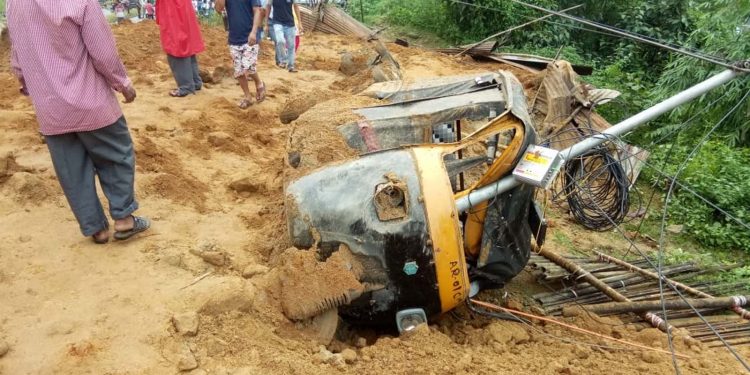 A view of landslide in Itanagar. (File image)

A minor girl was killed in a landslide triggered by heavy rainfall at the Doni Colony in Itanagar on Thursday.

The landslide reportedly occurred at around 8.15 am.

The minor’s body was retrieved from the debris and brought to R K Mission hospital in Itanagar where she was declared ‘brought dead’ by the hospital authorities.

This is the second incident of people falling prey to nature’s fury in the state in a span of a month.

A woman and her two children were killed when a landslide buried their house in Dibang Valley district on May 26.

The 27-year old mother, her son, aged 7 years and a daughter aged 3 years died on the spot when the house they were living in was buried by the mudslide.

Chief Minister Pema Khandu has expressed deep shock and sorrow over the loss of the minor’s life.

Conveying his heartfelt condolences to the bereaved family members who fell prey to nature’s fury, Khandu said that the state and it’s people are with the victim during these trying times.

He announced an immediate release of ex-gratia of Rs. 4 lakh to next of kins of the deceased.

Assuring all possible support from the state government, Khandu directed the district administration and the disaster management department to continuously monitor the situation.

Meanwhile, in another incident, a woman died after being drowned in the Lagun River near G-Extension in Naharlagun on Wednesday evening.

The lady was reportedly on her way back home from her shop when she got drowned while crossing the river. Her body was recovered from Nirjuli on Thursday morning.

“While the entire world is fighting Covid-19 pandemic, Arunachal has added problem of natural disaster every year,” chief minister Khandu said while expressing deep shock and sorrow over the unfortunate incident.

He further appealed the people living in the low land areas to shift in safer places while requesting those residing in landslide prone areas to immediately get to safer locations.

Rainfall triggered landslides and flood have left trails of large scale devastation in several parts of the state so far.