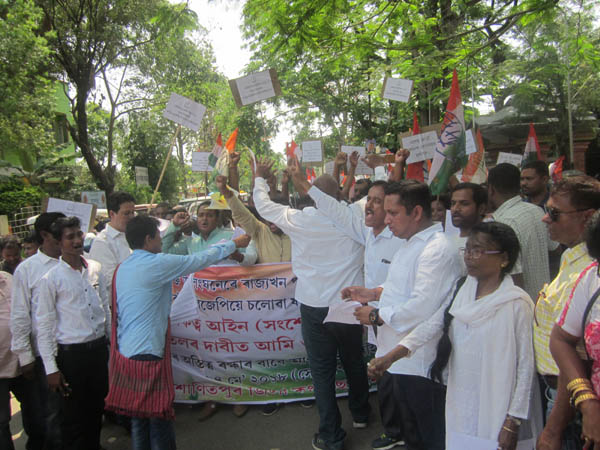 Assam Pradesh Congress Committee APCC (I) stage their strong protest against the Citizenship Amendment Bill 2016 in Gohpur in Biswanath district and Tezpur separately on Sunday.

The State APCC President Ripun Bora along with other senior Congress leaders among the locals in Gohpur sub division took out a protest march throughout the town and vehemently criticized BJP led government in the state and Centre.

In protest against the government’s stand the members of the Sonitpur district committee of the apex literary body took out a protest rally throughout the town here. The protestors terming the bill as a destroyer of the ethnicity, culture and language of the local indigenous people, mentioned that no further burden of foreigners would be accepted. The protestors later submitted a memorandum to the Deputy Commissioner that was addressed to the JPC.

At Tezpur district congress committee under the leadership its president Bhimananda Tanti and Hiranya Bora took out a huge procession where two senior state committee members Naba Talukdar and Diganta Choudhury joined in the rally .

The district committee of two block Tezpur and Depota also collected a signature campaign where 10 thousand signatures have been collected within two days and today submitted to the Sonitpur deputy commissioner  Manoj Kumar Deka during the protest march.

Meanwhile during the protest in Gohpur, Congress worker also took out a cremation march of Assam Chief Minister Sarbananda Sonowal. On the other hand Krishak Mukti Sangram Samittee  KMSS distributed leaflet  to the public at Court Chariali here demanding strong opposition to the Bill .