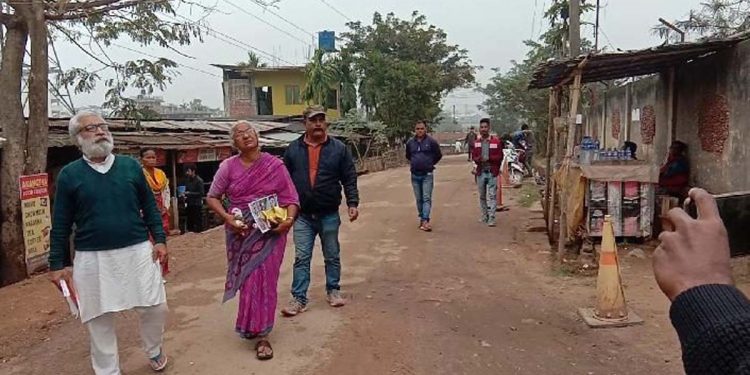 Narmada Bachao Andolan leader Medha Patkar on Wednesday termed the anti-CAA protests being organized by AASU across Assam as a ‘government agitation.

Talking to reporters after meeting the KMSS leader, Patkar, the winner of the Right Livelihood Award in 1991, said, “The government has pushed AASU in the anti-CAA agitation. Akhil Gogoi has been jailed to stop the agitation launched by the Krishak Mukti Sangram Samiti.”

Speaking in the same tune, Ramon Magsaysay Award 2002 winner Sandeep Pandey alleged, “When I came to Assam in December 2018 when the anti-CAA agitation was going on, the AASU was not visible.”

Medha Patkar said, “There are no sufficient facilities for the prisoners in the jail here. The government fears Satyagrahees.”

Questioning the ability of the Assam Police, Medha Patkar said, “Why should Akhil Gogoi be handed over to the NIA? This is a political conspiracy. The citizens have the constitutional rights to oppose or accept a bill.”

“Now, Krishak Mukti Sangram Samiti (KMSS) has become a political factor for the BJP. SO the BJP-led government has sent behind the bars,” said the Narmada Bachao Andolan leader.

Claiming that the government has no proof against Akhil Gogoi on the allegations leveled by them, Patkar said, “I don’t think the intervention of the NIA is the right step.”

Saying that lakhs of people gather in Akhil Gogoi’s meetings, Patkar asserted, “Akhil Gogoi can’t be a Maoist. The government has failed to provide any proof against him.”

However, AASU chief adviser Samujjal Kr Bhattacharya denied the social activists’ remarks and said, “The anti-CAA protest going on in Assam is a mass agitation which has been participated by the public in large numbers.”