Bandita Borah, who has been serving as a teacher at Jawahar Navodaya Vidyalaya, Jorhat, has received the termination notice

A woman school teacher of a central government school in Assam has been served with a termination notice for supporting school students participating in anti-CAA protests.

According to media reports, Bandita Borah, who has been serving as a contractual teacher at the Navodaya Vidyalaya, Jorhat at Titabar, has received the termination notice from the school authority.

“Bandita Bora, a teacher of Jawahar Navodaya Vidyalaya, Jorhat, situated at Titabar, has been supporting the students of the school, who have protested against the CAA,” said sources.

According to the order issued by the principal of the school, Mukesh Kumar, on December 24, Borah, a faculty-cum-system administrator (FCSA), has been terminated with effect from December 24, 2019, as per Clause No 08 of the Contract Agreement for the post. 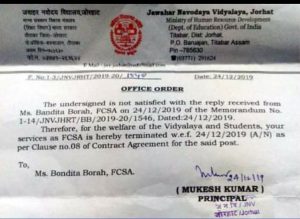 Jawahar Navodaya Vidyalayas (JNVs) is a system of alternate schools for talented students predominantly from rural areas in India.

They are run by Navodaya Vidyalaya Samiti, New Delhi, an autonomous organization under the Department of School Education and Literacy, Ministry of Human Resource Development, Government of India.

The All Assam Students’ Union (AASU), an organization that represents students from the school level to the university level, has been leading the anti-Citizenship Amendment Act (CAA), 2019 across Assam.

The AASU has been able to motivate the students to join their movement against the new Act.

Also read: We will continue our anti-CAA agitation: AASU

The BJP-led government in Assam has also warned all its employees against using social media as the popular platform has widely been used to spread anti-CAA messages.

The Elementary Education department recently issued a letter warning permanent as well as contractual employees against indulging in political activities by us in different social media like Facebook, WhatsApp, and Twitter.

Director of elementary education department S K Bhuyan issued the order saying that disciplinary action will be initiated against those employees for violation of Assam Service (Discipline and Appeal) Rules 1964.

The warning and at a time when there is surging protests over the CAA in Assam other parts of the region against the BJP led government at the centre and at the states.