Adil Hussain adds another feather to his illustrious cap

Acclaimed actor from Assam, Adil Hussain has added another feather to his illustrious cap.

He bagged the Best Actor Award at the Innovative International Film Festival of Bangaluru for his captivating performance in Mukti Bhawan (Hotel Salvation).

The movie directed by young director Shubhashish Bhutiani has also won the coveted Best Film Award in the festival.

Produced by Sanjay Bhutiani, the film is a poignant drama about a son who is forced to set his job aside to accompany his elderly father to the holy city of Varanasi.

The film Mukti Bhawan is based on relationships and family written and directed by Shubhashish Bhutiani.

It’s a film that follows the story of a reluctant son who must take his father to the holy city of Varanasi, where his father believes he will breathe his last and attain salvation.

Adil’s character Rajeev is forever flailing between the pragmatic and the profound, wondering if his father’s readiness for death makes any sense at all, and also questioning whether the hotel that promises salvation is itself haunted.

Adil had also won the Jury’s Special Mention at the National Film Awards for his role in the movie. 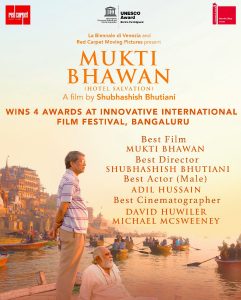 He had also won the best actor’s award for his intense performance in the movie, ‘Mukti Bhawan’.

Some of them include DC South Asian Film Festival (USA), Rajasthan International Film Festival, News18 Reel Movie Awards and special mention at Films of India Online Awards, among others.

In a tweet on his official Twitter handle Adil wrote: Very Happy to receive the #BestActor award at the Innovative International Film Festival, Bangaluru. Even Happier that our film is Awarded #BestFilm #BestDirector and #BestCinematography

Adil also found a place in NDTV’s Ten Best Actors of 2017 list for his spectacular performance in Mukti Bhawan.

Some of the unforgettable performances by Adil include movies like Life Of Pi, The Reluctant Fundamentalist, Unfreedom. He’s also worked in the Norwegian film What People Will Say.

Fire breaks out at Serum Institute of India in Pune