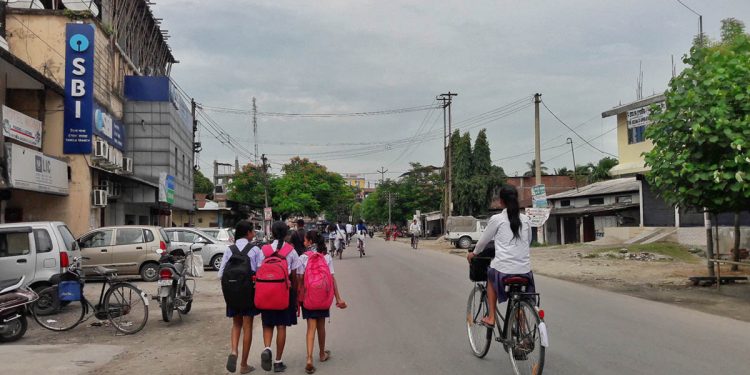 School students on their way back home in Udalguri. Image: Northeast Now

The All Bodo Students’ Union (ABSU) has lashed out at the government over the delay in supply of free textbooks to Bodo medium students.

The new academic session is set to begin from January 1, 2020.

“Every year, such unwarranted delay in supply of textbooks by the Assam State Textbook Production and Publication Corporation Limited have been hampering the Bodo medium students,” said ABSU education secretary Kastom Basumatary.

“The new academic session is scheduled to begin from January 1, 2020. But the distribution of free textbooks has been delayed in four districts of Bodoland Territorial Autonomous District (BTAD),” he reiterated.

“The four districts are Kokrajhar, Chirang, Baksa and Udalguri,” he added.

“Moreover, the Gossaigaon block in Kokrajhar district and Tihu-Barama Block in Baksa have not received a single textbook so far,” the ABSU leader informed.

“Such delay will only hamper the growth and education of the Bodo medium students,” Basumatary added.

“We demand the immediate supply of books,” Basumatary said.

“In the past, delay in the publication of Bodo language textbooks resulted in late distribution and generally it got delayed to March-April,” said Udalguri District Elementary Education Officer (DEEO) Bhaben Deuri told Northeast Now.

“However, we are expediting the process this year and new textbooks will be available within the second week of January,” he added.

The Assam government, since 2016, has been distributing free textbooks to students of government schools with an aim to improve the enrolment rate.