The 7th Rangsina Sarpo Awards were presented in the evening of March 25 at Joysing Doloi Auditorium in Diphu. 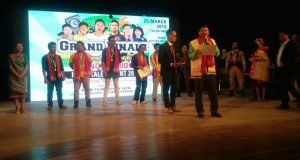 There are 21 categories of awards given for Karbi films.

The Department of Cultural Affairs, KAAC, also gave away the awards for Longbi Chidu Karbi Talent Hunt 2018 for singing in which Jyoti Terangpi came out as the winner. The runners-up is Utpremson Engti of Geetashram, Diphu and the second runners-up is Ajoy Terang, Taralangso, Diphu.

Chief Executive Member, KAAC, Tuliram Ronghang gave away the awards. He handed over a cheque of Rs 1 lakh to Jyoti Terangpi along with a trophy while he gave another Rs 1 lakh on his own to encourage her.

‘Pepper Chicken’ and viability of streaming platforms for Assamese content