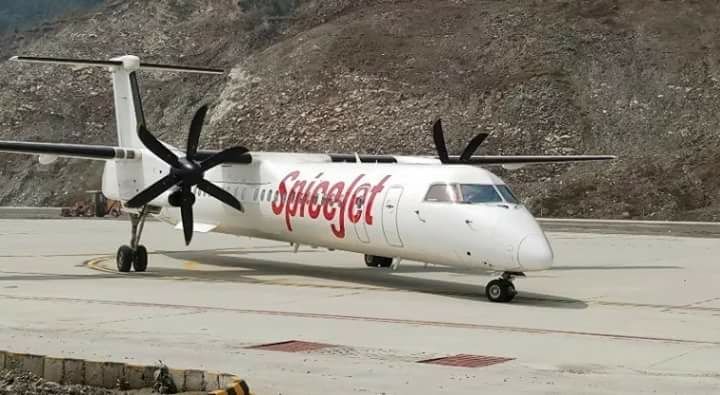 Spicejet on Tuesday started its daily service in the Kolkata-Lilabari route becoming the first private airliner to serve in the regional connectivity programme under UDAN-II.

Spicejet’s flight SG-3345 arrived at Lilabari airport today at 12.35 pm from Kolkata marking the new beginning of air connectivity to this northeastern corner of India.

A meeting was organized on this occasion at the Lilabary airport which was attended by Pradan Baruah. Lakhimpur MP, Utpal Dutta, Lakhimpur MLA, Dr. Jeevan B, Deputy Commissioner, Lakhimpur and officials from Airport Authority of India.

Speaking on that occasion MP Baruah said that the Lilabari-Kolkata air service by Spicejet was the outcome of the initiative by Prime Minister Narendra Modi under mission UDDAN and Advantage Assam.

He also announced the regular flight by Air-India to Guwahati from Lilabari from March this year. The Lakhimpur MP also added further connectivity to this region with new trains in near future in that meeting.

Speaking on that occasion Lakhimpur DC Dr Jeevan B. said that the Lilabari-Kolkata air service would boost the tourism sector of this region. Lakhimpur MLA Utpal Dutta and SP Sudhakar Singh stressed the importance of air-connectivity between Lilabari and Guwhati as the road connection is very lengthy.

The Spicejet flight SG-3346 left for Kolkata from Lilabari at 1.05 pm which was flagged off by MP Pradan Baruah.