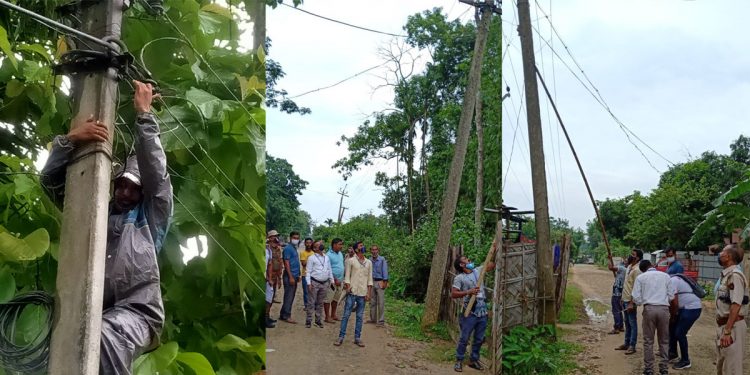 Raids in several places in Assam.

The Assam government filed a total of 611 FIRs for illegal electricity connections and power theft in the month of June.

In the month of June, the APDCL conducted a total of 1,904 raids against illegal electricity connections.

The power distribution company of Assam received Rs 502 crore from its consumers in the month of June and it is yet to get Rs 220 crore, principal secretary to home and power Niraj Verma and the state director general of police Bhaskarjyoti Mahanta informed reporters on Friday.

Principal secretary Verma informed that an amount of Rs 14.94 crore was collected as fine in the month of June and out of that amount, Rs 2.10 crore was already recovered.

Verma informed that most of the fines were collected from electricity consumers in Lakhimpur, Nagaon and Darrang districts.

The company disconnected the electricity lines of a total of 1.11 crore consumers while 48,172 of the connections were restored immediately after the clearance of the dues.

Verma said chief minister Himanta Biswa Sarma has directed them to ensure that the dues are collected and the power supply situation in the state is improved.

Verma urged the people of Assam to clear the electricity bills on the due date.

Earlier only five police stations across Assam were allowed to register cases against power theft but now all the police stations have been empowered to lodge cases and conduct probe, Verma said.