Three FIRs have been lodged against BJP’s Khumtai MLA Mrinal Saikia so far for his provocative speech during a party workers’ meeting at Chabua in Dibrugarh district on December 26.

While one Kaushik Kashyap from Lakhimpur district lodged an FIR at Dispur police station on Friday, Beer Lachit Sena, an organization that has remained vocal against the CAA, has also filed an FIR against the MLA.

Earlier, the Brihattar Asomiya Yuva Mancha, Sivasagar, lodged an FIR at the Sivasagar Sadar Police Station seeking action against the Khumtai MLA for his provocative speech.

MLA Saikia on Friday asked his party workers to retaliate against any attack on them by the anti-Citizenship Amendment Act (CAA) protesters.

He told the BJP workers that if any party man is touched or attacked by the protestors they should touch or attack 10 of them.

Saikia had said, “BJP workers have to come out strong. We have tolerated enough. If someone comes to burn your house, burn down 10 of their houses. We have the support of the people.”

Mrinal Saikia is not a stranger to controversial statements.

During his speech at Chabua, Saikia also asserted that the anti-CAA protests had been wrongly projected as a people’s movement.

A media report quoted Saikia as saying: “In a state with a population of 3.3 crore, not even 1 lakh people have joined the protests at a time. If such a small number of people is projected as ‘the masses’, what about those, who are not part of the agitation?” 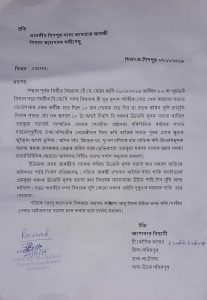 In his FIR, Kaushik Kashyap said that “by making a provocative speech at the time of the latest burning situation in Assam, MLA Mrinal Saikia has ignited the fire of anger again among the people”.

“The Assam Police has already announced that it was committed to giving legal punishment to all who makes provocative speeches,” Kashyap said.

He added, “So, I hope, the police administration by remaining with the people will also take action against the MLA who has delivered a provocative speech.”

While sharing the copy of the FIR by Kaushik Kashyap on his Twitter handle and tagging the Assam Police, a Twitterati asked Assam Police: “@assampolice will u (you) take ny (any) action against him?”