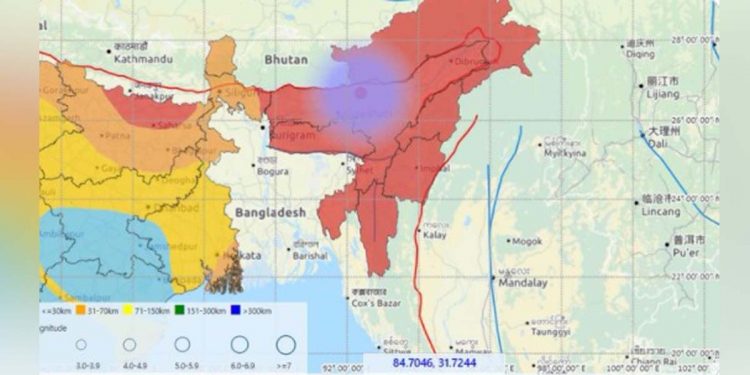 An earthquake of 3.5 magnitude on the Richter Scale jolted Assam at 7.22 pm on Wednesday.

According to the National Center for Seismology (NCS), the earthquake occurred at a depth of 27 km.

The epicentre of the earthquake was located 40 km west of Tezpur in Assam’s Sonitpur district.

However, there has been no reports of any casualty or damages caused by the earthquake.

On April 28, 2021, an earthquake of the Magnitude of 6.4 on the Richter scale jolted Assam and other Northeast states at 7:51 am and a total of 10 aftershocks were felt on the day after the main shock.

According to National Center for Seismology (NCS), the earthquake occurred at Sonitpur in Assam with the epicentre at 26.690 north and 92.360 east, focal depth of 17 Km.

The epicentre was closer to the plate boundary and located at about 80 Km northeast of Guwahati, 132 Km north of Shillong and 180 km west of Jorhat, said an NCS report.

According to the report, a total of 6 aftershocks of the magnitude of 3.2 to 4.7 on the Richter scale were felt within two and half hours of the main shock.

“Damages to buildings also reported within 100 km from epicentre in areas of Sonitpur, Nagaon, Guwahati as received from Central Seismological Observatory, NCS, Shillong and Regional Meteorological Centre IMD, Guwahati,” the report had said.