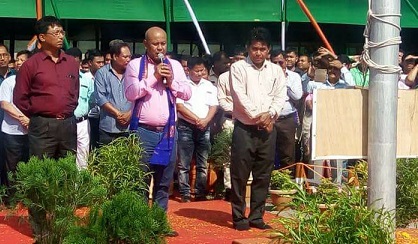 Bodoland Territorial Council Chief and Bodoland People’s Front (BPF) President Hagrama Mohilary on Sunday said, Kokrajhar Lok Sabha MP Naba Sarania, who has been leading the non-Boros in the Bodoland Territorial Areas District (BTAD), is not a factor for the BPF and he would lose the Kokrajhar seat in LS polls scheduled to be held in 2019.

“Kokrajhar MP Hira Sarania and the Oboros (non-Boro) are not factor for the BPF party and Sarania will lose the Lok Sabha elections this time. The BPF party has been working for the all-round development in every sector in the BTAD region as well as outside the BTC region,” said BPF President Mohilary at the 6th annual conference of the Central Committee of BPF held on Saturday at Suklai Serfang central field in Baksa district.

Mohilary hoisted the party flag in the morning session and paid homage to pay tribute to those who have sacrificed their lives for the party. During the conference, a delegates’ meeting of the party was also held later where several issues were discussed.

Talking to the media, BTC Chief Mohilary said, “The BPF is now a strong party and it will win the 2019 Lok Sabha elections.”

He also said, “Our party has been becoming stronger and the party strength has been increasing day by day.”

“We have taken all views from the party workers of the parent BPF, women BPF, Youth BPF, minority cell, BSU and outside the BPF party during the conference,” he added.

Mohilary also said, “Our party has been planning Bodoland Garmin Vikash Bank for the greater interest of the people of BTC region and discussion is going on for more SAI complexes to be set up in Udalguri, Baksa, etc. and construction of BPF party offices outside the BTC region as soon as possible.”

Meanwhile, Gonesh Kachari, President of the Reception Committee, who is also Executive Member of BTC for Health, claimed that the day-long programme of the 6th annual conference of BPF concluded successfully which was attended by lakhs of people.

He said, “Under the leadership of BTC Chief Hagrama Mohilary, various development activities have been taking place in all the four districts of BTC region in every sector and our party strength has been increasing day by day.”

Kachari also informed that popular singer Shaan performed in the two-hour cultural night in the conference and lakhs of people enjoyed the Shaan’s performance.