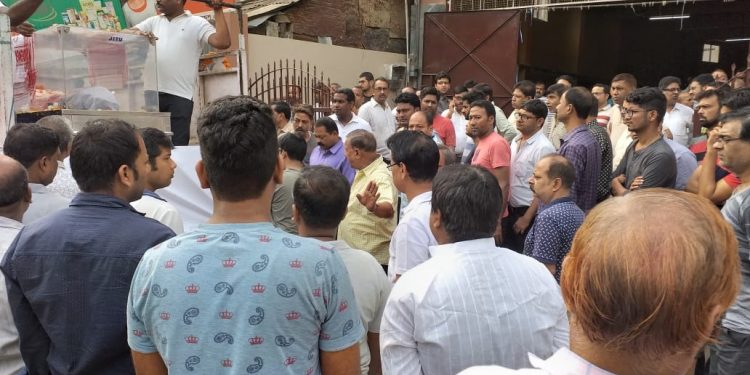 Bodies of the Garodias being brought to their Sivasagar residence. Image Credit - Northeast Now

The people of Sivasagar gave a tearful adieu to the physician of Sivasagar Civil Hospital, Sumit Garodia, and his wife Nandini Garodia.

The Garodias lost their lives in a tragic road accident which occurred near Burapahar range in Nagaon district of Assam.

Both their sons suffered heavy injuries and were rushed to Guwahati in a critical condition. They are stated to be out of danger now.

The couple’s body was brought to Sivasagar town early in the morning today and was kept at Aashirvad Bhavan.

Thousands of people gathered to pay their last respect to the departed souls. A lot of dignitaries were also present.

A pall of gloom has descended on Sivasagar town. As soon as the Garodia couple’s body arrived, thousands of grief-stricken people started wailing.

Sumit Garodia was very popular among his colleagues, nurses and patients for his “mild nature and commitment towards his work”.

Later, the bodies of the Garodias were taken to their Dibrugarh home from where Sumit Garodia originally hails. Their bodies will be consigned to flames today in Dibrugarh.

The Garodias lost their lives while they were on their way to attend a relative’s wedding in Hojai. Near Burapahar range in Nagaon district, the Garodias’ car met with a head-on collision with a Traveller vehicle.