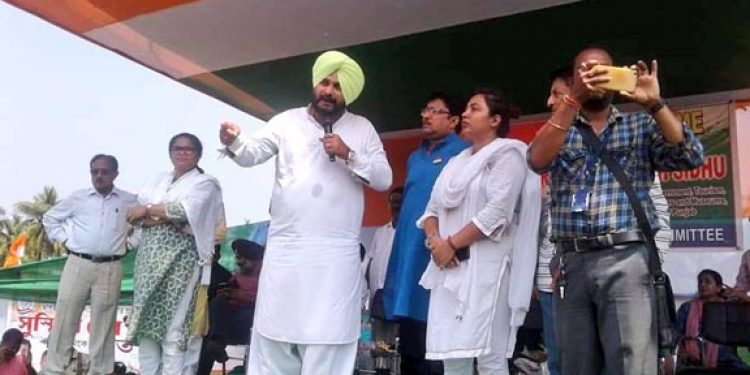 Congress’ star campaigner Sidhu captivated the audience with his witty shayaris all throughout his 22-minute speech before the crowd.

“If the NDA-led government is brought back to power in 2019, the country would get destroyed in the next few years. In BJP’s 384 commitments to the nation in 2014, as per their manifesto, tell me, how many of those have been fulfilled in their last five years of rule in the country,” Singh asked the crowd.

He added, “Rs 15 lakh has not entered any poor men’s account by bringing in black money nor they have been able to give two crores of jobs to the youths. You see, Congress has given four Gandhis to this nation. Mahatma Gandhi, Indira Gandhi, Rajiv Gandhi and now Rahul Gandhi, and likewise, we have three Modis. One Nirav Modi, one Lalit Modi and the last one is Narendra Modi, who is the biggest liar of all.”

Sidhu went on and said, “Narendra Modi keeps himself calling a chowkidar, but have you ever seen a chowkidar watch guarding a poor farmer’s hut or a poor peasant instead you would find them before the palatial houses of Ambanis and Adanis.”

In her address before the arrival of Sidhu, Indian National Congress (INC) candidate and All India Mahila Congress president Sushmita Dev challenged Assam finance minister and BJP leader Himanta Biswa Sarma, who in a rally informed the crowd that Sushmita Dev has not been able to utilise her MPLAD fund, what good she can do for the people of her constituency.

She said, “I challenge him to what he has said, and if he can prove me wrong, I will quit politics and if he fails to do so, he should do the same.”

Coming down heavily on Sarma, the convenor of North East Democratic Alliance (NEDA) led by BJP, Dev said, “Himanta’s comment on not eyeing for any vote from people wearing ‘lungis’ and ‘dhotis’ is shameful and is highly objectionable. He should say sorry before the people and answer the people of Barak Valley as to why he stopped holidays during Bhasa Swahid Divas, Bir Tickendrajit’s birth anniversary or even Fridays being holidays for madrassas earlier.”