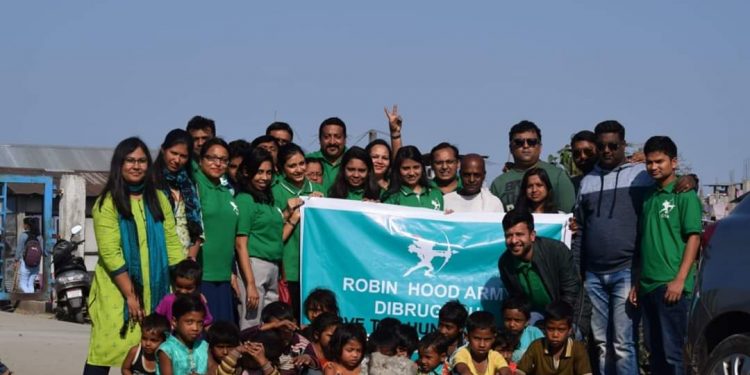 Along with other parts of the country and the world, Robinhood Army, a voluntary organisation, has turned out to be saviour for the needy people in Assam’s Dibrugarh too.

Every Sunday the organisation collects food and provides it to the needy people in and around Dibrugarh town.

With the motto of ‘Serve the hunger citizen’, the Robinhood Army was established in New Delhi on August 26, 2014 by Neel Ghose, Anand Sinha and Aarushi Batra.

Robinhood Army collects surplus food from restaurants and distributes the same to the less fortunate sections of the society in cities across India and 12 other countries.

The organisation consists of over 16,500 volunteers in 103 cities and has served food to over 9.2 million people so far.

“We have seen that hunger is the main problem plaguing the society and many people cannot have daily food. So, we decided to open an organisation which could feed needy people of the society. After discussion with few of our friends we came to know about Robinhood Army, which has been providing food for the needy and the organisation is working in Guwahati. After that we have opened the organisation with some of our friends and started our drive on October 28, 2018,” said Sanchita Dhar, a member of Dibrugarh unit of Robinhood Army.

“Our main aim is to eradicate hunger and feed as many people,” Dhar added.

However, every Sunday the organisation conducts drive in Dibrugarh town to feed needy and deprived people.

She informed that they have around 50 members in Dibrugarh.

“We have already conducted many drives in an around Dibrugarh and have distributed food and clothes to the deprived people. Last week, we fed more than 200 kids in Panchali area. Our organisation does not accept monetary donations and only distributes food or donations in kind that it receives from its restaurant partners and donors,” Dhar said.

The organisation has been very active in social media and through the social media they are promoting the idea of self sustained community.

“We actively leverage Facebook and Twitter to generate awareness and inspire new volunteers to join us,” Dhar added.