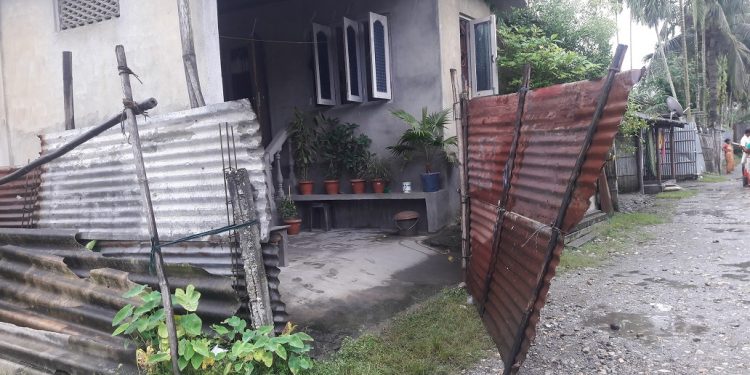 The house of Ali Akbar located in the Subhaspolly locality of Tangla town which was barged by bike lifters on Monday night. Image: Northeast Now

The rise in bike lifting cases in and around Tangla town in Assam’s Udalguri district has become a matter of concern for all.

It is becoming a regular phenomenon as the organized gang of miscreants has lifted a number of motor-bikes and gearless scooters in the past couple of months.

“The miscreants mostly break open iron gates and makes away with the two wheelers,” said a police office who did not want to be named.

“Royal Enfield motor-bikes seem to be their favourite,” added the police officer.

The Tangla police have not been able to make any breakthrough in the bike lifting cases barring a few arrests and recoveries of bikes stolen from other parts of State.

In the latest incident a newly brought Honda Activa scooter which was yet to be registered was stolen on Monday night from the residence of a school teacher, Ali Akbar located in the Subhaspolly locality of Tangla town.

“The miscreants made entry through the front entrance and escaped with the scooter,” said wife of Ali.

Previously a Royal Enfield Classic motor-bike bearing registration number AS-27-B-6897 was stolen from the residence of an insurance agent, Sujoy Kanti Saha located in Hospital Road area of Tangla town on the night of September 18 last.

“Two of my neighbours Bhabani Rabha and Babool Nath’s Royal Enfield motor-bikes were also stolen in the past and even another bike of the same make from the house of Karuna Swargiary in the Jalukbari locality of Tangla town were stolen,” said Saha.

Unofficial reports revealed that the lifting of bike could have crossed 20 and there are reports of at least 12 bikes stolen from different parts of Tangla town.

The failure of the police administration to detect and nab the lifters has been resented by the people.

Conscious locals have alleged that the bike lifters are well organized and there is an oiled network which could even in possession of illegal weapons.

The police administration is tight lipped on the matter.

A police officer on anonymity said records have to be checked.

A local resident, Pranab Das has slammed police administration and said immediate measures must be taken to ensure safety and security of the life and property of the citizens and the miscreants nabbed and put behind bars.

The local organizations have also pressed the need of beefing up security in the Tangla town and keeping tab on the growing anti-social activities.