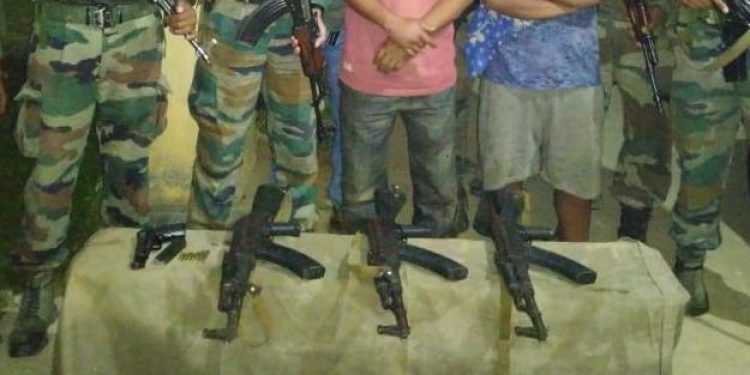 Assam Rifles claimed to have arrested one suspected arms dealer along with an accomplice in an operation in general area of Kakching in Kakching district of Manipur recently.

“Based on input received regarding a weapons deal, taking place in the general area of Kakching Garden, troops established multiple Mobile vehicle check posts in the area,” claims Assam Rifles (South) PRO in a press release on Friday.

“A Maruti 800 car was stopped for checking, the accused, Kn Angdum (43) son of D Tomba, a resident of Khudei Khunou village rushed out of the car pointing a loaded pistol at Assam Rifle troops and tried to flee,” the release added.

The troops of Assam Rifles pursued the individual and nabbed him after a brief scuffle, the release said. The accomplice, D Madun (25), son of D Tomba a resident of Khudei Khunou village was caught inside the car only.

During interrogation, the individuals provided information regarding a cache of weapons hidden beneath a nearby culvert. A detailed search of the area led to the recovery of three AK-56 rifles with magazines, one 9 mm Pistol with a magazine and five rounds, the release said.

One Maruti 800 car and FZ Yamaha motor cycle involved in the gun running racket have also been seized.

On questioning, the individual revealed that he was an ex cadre of NSCN (IM) and had served in the outfit from 1992 to 2011, and he has been helping the outfit with regards to their various logistic issues, it further added. Both the individuals have been booked and handed over to the Kakching police for further action.