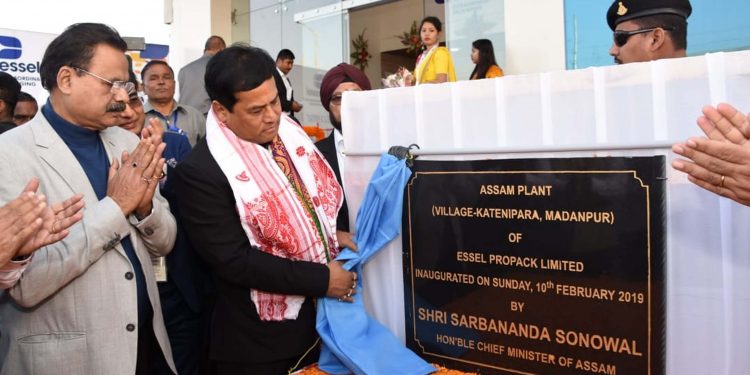 Assam chief minister Sarbananda Sonowal on Sunday said that after only one year of the successful organization of Advantage Assam: Global Investors Summit, the State is witnessing a plethora of big-ticket investments which have underlined the State’s potential to become a top investment destination.

Sonowal said this on Sunday while inaugurating the greenfield manufacturing plant of Essel Propack at Madanpur in Kamrup.

“The summit which saw the signing of some 240 MoUs with the commitment of Rs 79,000 crore investment has already resulted in public sector investment to the tune of Rs 40,000 crore and nearly Rs 10,000 crore from the private sector. We are marching ahead in our goal to make Assam the gate way to South East Asia and positioning ourselves as a top investor friendly destination in the country. As a result, the state is witnessing an economic resurgence,” Sonowal said.

Essel Propack is one of the top manufacturing companies in the world of laminated plastic tubes catering to the FMCG and Pharma sectors. This is the seventh such plant of the company in India and first in NE region which has set up bases in many countries of the world. In the first phase, the company has invested an amount of Rs 82 crore which will be increased to a total of Rs 192 crore in subsequent phases.

The plant is currently providing employment to 150 people and it has a manufacturing capacity of 275 million tubes annually. Dabur, Ozone, Emami, Hindustan Unilever, Patanjali etc are some of the companies that purchase tubes for their products from this Essel Propack plant.

Saying that Essel Propack was one of the companies which committed investment in the state during the road show held in Mumbai before Advantage Assam summit, Sonowal thanked CMD of Essel Propack Ashok Goel for fulfilling the commitment by opening this production facility which would generate employment.

Highlighting the landmark initiative of the Central Government to increase the production capacity of Numaligarh Refinery Limited from 3 MTPA to 9 MTPA with a whopping investment of Rs 22,594 crore which would open newer avenues of employment, Sonowal urged the State’s youth to empower themselves to take advantage of this changing scenario.

He also called young aspiring entrepreneurs to come forward to derive benefit from the ‘Assam Start-up – The Nest’ incubation centre recently opened by the state government so that Assamese youth can become job creators instead of being job seekers.

Saying that the State Government is making all efforts to provide a conducive environment to the investors to facilitate industrial growth, the chief minister said that Act East Policy has given impetus to the trade and business in the state and through this policy the state would become the gateway and the business hub of South East Asia.

Chairman and Managing Director of Essel Propack Ashok Goel thanked the State Government for support and cooperation in setting up this plant and said that this through this plant the company is aiming to capture the market of the ASEAN countries.

He informed that 90 percent of the employees in the plant is from the state and he highly appreciated the Assam’s young generation for their willingness to learn new things and zeal to work dedicatedly.

State industry and commerce minister Chandra Mohan Patowary said that this is only the beginning of the industrial revolution taking place in the state and he informed that more and more companies would come to the state in the near future.