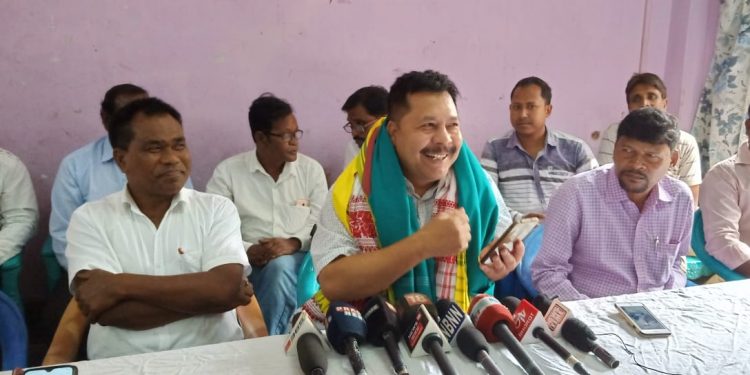 Naba Kumar Sarania who was re-elected from the Kokrajhar (ST) HPC in Assam on Friday batted for creating separate Kamatapur state.

Ironically, Sarania, after declaration of the election results on Thursday had said that he is against any further division of the State.

Talking to reporters at Kokrajhar Press Club on Friday, Sarania said his victory for second time was for the people of different communities of BTC region. He said the ethnic communities who have been being deprived by the Bodos voted for him. He assured that he will be giving due privileges and justice to all communities.

In course of his reply, Sarania said the voice of separate state of Bodoland came to near end as the BPF has also given up the issue of Bodoland statehood movement. He also said he raised voice against the creation of separate Bodoland state and will raise the same voice as there has been lot of shortcomings in BTC itself.

The MP said he was always against further division of Assam and will oppose the move of separate state of Bodoland.

When again asked as to why he was contradicting his stand on division of Assam, Sarania said he supported the Kamatapur state as there will be no discrimination against any community in BTC if Kamatapur is created. He also said that every community will have equal rights and privileges.

The media persons of Kokrajhar reminded him that the BTC region was left with utter neglect but after the region has witnessed lot of change and rapid development every where right from road communications to higher education after the council was form that are benefiting to all communities, Sarania said there were some problems of non-Boro communities and they were being neglected. He also said after his winning things will change in 2020 hinting that non-Boro group will overcome BTC administration by winning in majority seats in the council election due next year.

When asked as to why he has set his eyes to take over BTC administration who otherwise has been demanding exclusion of villages and scrapping of BTC accord constantly, Sarania got mixed up for a while and said he opposed the creation of Bodoland state that did not mean to stay away from participating in council election.

He was also asked as to why he had been against the issues of tribal communities despite he is representing from ST reserved seat for ST communities,  he said he will cooperate for addressing problems of ST communities in the days to come.

Replying to massive querries on the communal politics dividing Boro and non-Boros, he said the term ‘O-Boro’ came when the majority section of people were denied of their rights and privileges in BTC.

He said after 2020 there will be new change in the region where everybody will enjoy equal rights. He also said they will sit together with the organizations that are supporting them.