There will be no compromise in bringing Dima Hasao forward towards development, says Debolal Gorlosa 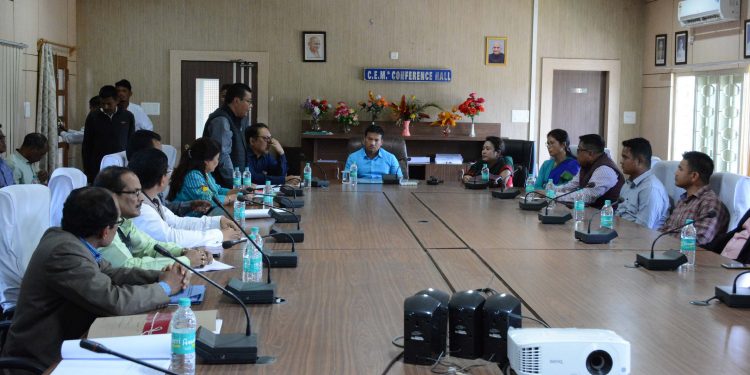 NCHAC CEM Debolal Gorlosa during a review meeting at the CEM's conference hall at Haflong on Thursday. Image - DIPR

After taking charge as the chief executive member (CEM) of the 12th North Cachar Hills Autonomous Council (NCHAC) for second term, Debolal Gorlosa had a review meeting with all the departmental heads of the entrusted departments under NCHAC at the CEM’s conference hall on Thursday.

This was the first review meeting after assuming his office as the CEM for the second term.

Giving stress on proper implementation of the works allotted for development under various departments, the NCHAC CEM strictly ordered the concerned departments that any hindrances on completion of works or projects caused due to contractors negligence should be brought to his notice and if need be, those allotted contractors be black listed, said a DIPR release.

Making his objectives clear as the CEM, Gorlosa stated that there will be no compromise in bringing Dima Hasao forward towards development, no matter how many challenges he might need to face.

“Practical schemes with proper implementation are what are necessary in order to bring progress within the district and i shall see that each work is implemented properly during these five years,” said CEM Gorlosa.

Reviewing all works minutely during the meeting with the officials of the PWD, PHE, education, medical, agriculture, social welfare, veterinary etc., the CEM instructed that all pending works to be completed as per stipulated deadlines.

Gorlosa specially directed the officials of PWD road divisions to speed up the road construction works within the descent of the rainy season.

He told the officials of the education department that he will keep a special watch on the teachers’ attendance in the rural areas, considering the poor state of education penetration in the district.

Stating that many notable changes have already been brought in Dima Hasao district during his short tenure of two-and-half years as a the CEM in the previous term, he is far more confident that in the next five years, the Dima Hasao district will see a sea of developmental changes.

Thanking all the officials for their inputs during the meeting CEM Gorlosa requested all the newly inducted MACs, department officials and also the public in cooperating him in his attempt to develop Dima Hasao.