After Congress MP Pradyut Bordoloi raised the issue of poor wages for Assam’s tea garden labourers in Lok Sabha, the India Tea Association (ITA) has stated that the tea industry of the country is in crisis.

Participating in the debate on the Code of Wages, 2019 Bill on Wednesday, the Congress MP from Nagaon LS constituency demanded that the NDA government, which speaks about ‘One Nation One Tax’, should go for ‘One Nation One Wage’.

Expressing concern over possible disparity in wages between tea labourers of Assam and other parts of the country, Bordoloi said through the Bill the government wants to destroy the role of the trade unions of the labourers while fixing amount of wages and bonus.

He also said that the BJP prior to the Assam Assembly polls in 2016 had promised that it would provide minimum wage of Rs 351 to the tea garden labourers if it comes to power.

But despite being in power, the BJP-led government has kept the minimum wage of a labourer at Rs 167 per day, said Bordoloi.

He asserted that the Bill would only help the employers rather than the labourers.

On the other hand, ITA, which is the premier and the oldest organization of tea producers in India, in an advertisement published on Thursday in an English daily of Assam, revealed that the ‘tea industry is in crisis’.

The ITA in an appeal to the government stated that the ‘viability of the Tea Sector’ is “critical for security of employment of the million plus workforce”. 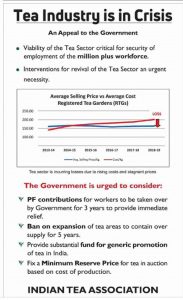 It also stated that ‘interventions for revival of the Tea Sector’ is an ‘urgent necessity’.

Stating that “Tea sector is incurring losses due to rising costs and stagnant prices”, the ITA urged the government to consider “PF contributions for workers to be taken over by Government for 3 years to provide immediate relief”.

It also sought “ban on expansion of tea areas to contain over supply for 5 years”.

The association urged the government to “provide substantial fund for generic promotion of tea in India” and “fix a Minimum Reserve Price for tea in auction based on cost of production”.

Founded in 1881, the Indian Tea Association has played a multi-dimensional role towards formulating policies and initiating action towards the development and growth of the Industry.

It also liaises with the Tea Board, government and other related bodies.

The ITA has over 425 member gardens. According to the website of ITA, as employers, “the ITA member gardens provide direct employment to more than 400,000 people”.