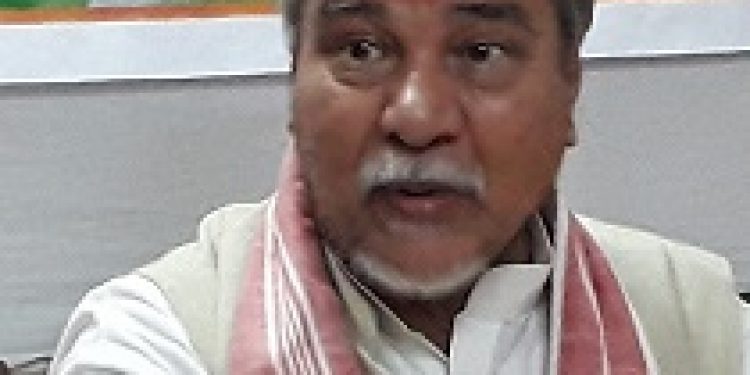 Bhubaneswar Kalita, the Congress candidate for the Mangaldai Lok Sabha seat in the round the corner Lok Sabha elections, has lashed out at the saffron party.

Addressing a poll meet in Mangaldai, the Congress candidate said that sitting MPs Ramen Deka and Narayan Chandra Borkataky of BJP who have won from the seat for three successive terms (read the former in 2009 and 2014 and the latter in 2004) have “simply failed to deliver”.

“The voters of Mangaldai constituency are simply sick and tired of the BJP and this time round the Congress will surely storm back to power,” stated Kalita.

“In 2014, there was a huge Modi wave and the saffron party came riding to power. This year, the scenario is totally different. The voters will knock BJP off their pedestal,” he stated in a fiery speech.

The Rajya Sabha MP, while continuing his tirade against the saffron party, further remarked that the sitting BJP MP of Mangaldai, Ramen Deka, has “miserably failed” in implementing the Central schemes in the constituency.

Lashing out at PM Modi, the veteran Congressman reminded the media persons present in the poll rally that the Prime Minister had shouted from the top of the rooftops in a 2014 election meeting that from May 16 of that year all the “illegal Bangladeshi foreigners will have to leave Assam bag and baggage”.

“The irony is that not a single illegal immigrant has left the Assam soil and, on the contrary, the Modi government is planning to heap the state with Hindu Bangladeshi migrants by passing the Citizenship Bill,” fumed Kalita.

On being asked what his contribution as a Rajya Sabha MP was, the four-time MP failed to give a concrete reply.