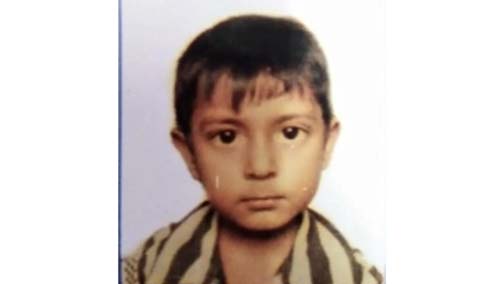 Sensation prevails in Karimganj after recovery of the body of a seven-year-old boy in Karimganj’s Chorbazaar area on Sunday.

According to information, on Sunday morning, some locals found foul smell coming out of a locked building in the vicinity. The locals informed the Chorbazar TOP in this regard and a police team led by In-charge Kalipada Dey rushed to the spot.

“The smell coming out from the building indicated something wrong and that is why we informed the OC, Circle Officer and others as we had to break the lock,” said police in-charge Kalipada Dey.

It is worth mentioning that on September 14, 2018, a seven-year-old boy, Sunny Deb, had gone missing.

Seven-year-old Sunny was on his way to his tuition teacher, Badal Deb, but never reached his teacher’s house.

Sunny’s elder sister too goes to Badal Deb’s house to take tuition from his wife. When she reached there, she did not see her brother and asked Badal Deb about him. The teacher (Badal) told her that Sunny did not reach his house that evening.

The family panicked and started searching for the little boy everywhere. A missing case was also lodged in Karimganj Sadar Police Station.

“When we unlocked the house and broke in, we recovered Sunny Deb’s body. The body has been sent for conducting post-mortem,” said Kalipada Dey.

“He was strangled with a gamocha and there were no marks of stabbing or any other external wound,” added Dey.

However, the police officer refused to tell any kind of speculations at this stage as that “might derail the entire investigation procedure”.

However, as per a senior police official close to the development, police have identified one Jagadish Mandal as prime suspect.

Police sources on condition of anonymity said, “Sunny Deb’s mother allegedly had extramarital affair with Mandal and recently they had a breakup. Sunny Deb’s mother started ignoring him and that is why Mandal killed her son to take revenge.”

Police investigation is on to unearth the reason of killing the child.