After the mishap, locals rushed to the spot and blocked the road connecting Silchar with Hailakandi via Duwarbond 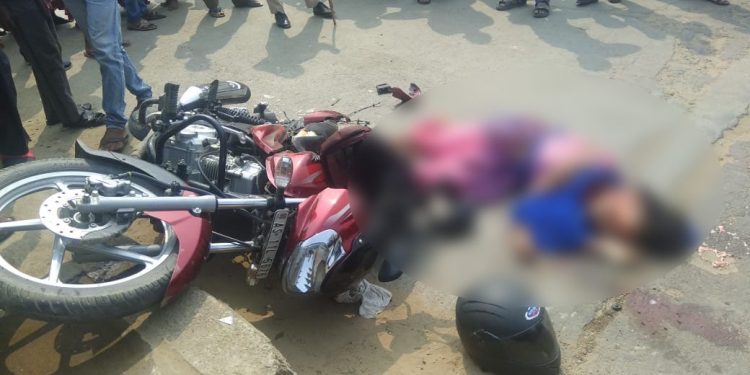 Sunanda Sinha who died in a road mishap near Silchar's NIT on Wednesday. Image - Northeast Now

A fatal road mishap on Wednesday cut short the life of 25-year-old Sunanda Sinha, a resident of Sudarshanpur of Hailakandi district of Assam.

Sunanda Sinha traveled to Silchar along with her cousin, Bibhu Sinha, on a motorcycle from her hometown to do some last-minute shopping and distribute invitation cards among her friends and relatives.

But a dumper truck rammed their motorbike near Silchar’s NIT on Wednesday afternoon.

Sunanda Sinha died on the spot while her cousin, Bibhu Sinha, who was driving the motorcycle, received severe injuries and had to be rushed to Silchar’s Medical College & Hospital (SMCH).

After the mishap, the locals rushed to the spot and blocked the road connecting Silchar with Hailakandi via Duwarbond.

Barricades were put up on the road bringing vehicular traffic to a grinding halt.

Police officials from Ghungoor police outpost and also from Silchar’s Sadar Thana had to rush to the spot to pacify the angry mob, who wanted immediate justice and arrest of the driver of the dumper.

Bibhu Sinha, who suffered grave injuries, talking to Northeast Now at SMCH, said, “I was driving on the edge of the road and the dumper kept coming towards us. The dumper rammed my motorbike from the back side and dragged it quite far which resulted in the fatal mishap and death of my maternal sister. She was slated to get married a few days from now.”

At the time of filing this report, road blockade has been lifted and Bibhu Sinha, who has suffered multiple injuries, is battling for life.