Assam, Meghalaya to share information on developmental projects along border

This decision was taken at the joint border meeting of the district officials held at Nongpoh, the district headquarter of Ri-Bhoi district. 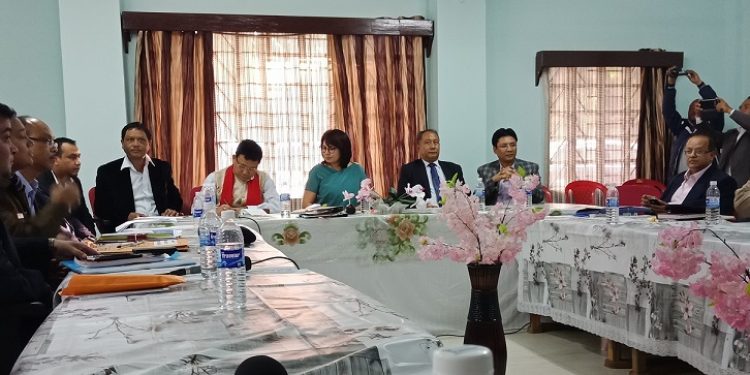 A joint meeting of legislators and district officials of West Karbi Anglong district from Assam, West Jaiñtia Hills and Ri-Bhoi district from Meghalaya decided that district officials from both sides should share information before taking up developmental projects in areas along the Meghalaya-Assam border in order to avoid any sort misunderstanding between the two neighbouring  states.

This decision was taken at the joint border meeting of the district officials held at Nongpoh, the district headquarter of Ri-Bhoi district.

The joint meeting discussed issues related to implementation of various developmental projects and the alleged involvement of Assam police in the demolition of structures built by Meghalaya in the border areas.

Dasakhiat Lamare, the MLA of Mawhati Assembly constituency which shares the border with West Karbi Anglong and MDCs of the JHADC did not attend the meeting.

Talking to reporters, Umroi MLA George B Lyngdoh said that the joint meeting decided that there should be sharing of information on such developmental activities especially the implementation of schemes and projects in areas long the inter-state border.

“We were informed during the meeting that the KAAC which is implementing most of the development works has never informed the district administrations in Karbi Anglong,” Lyngdoh said.

Baithalangso MLA Dr Mansing Rongpi said that the joint meeting decided that problems that are there in the border areas should be sorted out, whereas boundary matter rested with the state.

“We have agreed upon to continue with the development process in the border areas because the border areas are the most underdeveloped areas. But the feeling of suspicion should be removed and roles played by non-state players have been causing havoc,” he said.

On the resolution passed by the KHADC to re-transfer Block-I and Block- II from Assam to Meghalaya, Rongpi said, “The resolution of the KHADC will have to be ratified by the state of Meghalaya because border matters rest with the state not with district councils. All these areas, if claims are to be made, then the state of Meghalaya will increase and Assam will reduce. For that, Article 3 will have to be invoked, but that also does not rest with the state, but with the Centre.”

On Assam police having a hand in demolishing structures erected by Meghalaya in the border areas including at Umru village where Assam has created a police outpost, but demolished structures erected by Meghalaya, the Baithalangso MLA said, “development should continue because border areas are the ones which are least developed whether in West Karbi Anglong, Ri-Bhoi or West Jaiñtia Hills districts. However acts of demolition are allegations and such allegations have to be investigated and laid back.”