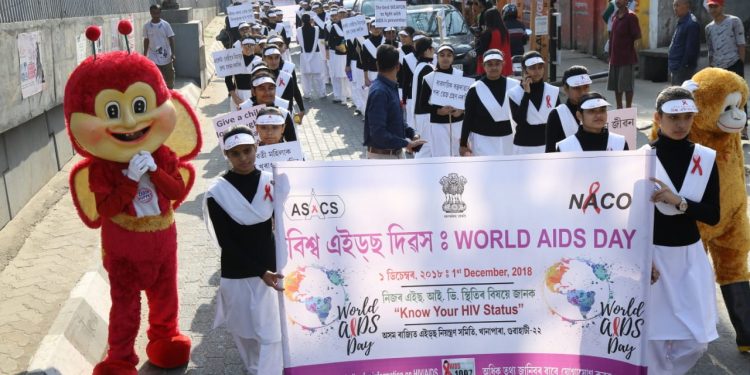 Along with the rest of the world, Assam State AIDS Control Organization (ASACS) organized World AIDS Day with a gamut of activities on Saturday.

The state-level function was organized at Sri Sri Madhabdeb Auditorium at Srimanta Sankardeva Kalakshetra, Guwahati which was preceded by a rally flagged off by noted actor Aimi Baruahvand ace footballer DurgaBoro.

The rally culminated at Kalakshtra.

The theme of World AIDS Day – 2018 is ‘Know Your Status’. The theme itself encourages one and all to know their HIV status.

Welcoming the participants, Project Director, ASACS Anurag Goel, IAS, said, “Though the HIV prevalence in Assam is 0.06 per cent, it is lower than the national average which is 0.22 per cent. However, the factor of concern is that Assam is highly vulnerable to HIV/AIDS mainly because it is the gateway to the Northeast.  As per NACO HIV Estimation Report 2017, the new rate of infection in Assam has increased by 37 per cent since 2010.”

He further said that after initiation of Early Infant Diagnostic (EID) programme the rate of mother to child transmission has come down. He also listed out the progress and achievements of ASACS.

Principal Secretary to Government of Assam, Health & FW Department, Samir Sinha, IAS said, “As per India HIV Estimation 2017 Fact Sheet it is estimated that Assam has 13539 people living with HIV (PLHIV) in 2017 and people accessing ART stands at 5846 till March 2018. The scenario is not at all pleasant because Assam is vulnerable to new HIV infections mainly because of inflow and outflow of migrants in the State.”

He further said seven new blood banks are coming up in the newly formed district of Assam and five new blood mobile buses will be launched shortly.

Speaking on the occasion, Chief Secretary, Assam, Alok Kumar, IAS said, “During 80s and 90s HIV there was no treatment.  But today, HIV programme has become one of the most vital public health programmes like Pulse Polio and other vaccination programme. I am very happy that today all non governmentorganizations, civil society organizations have come forward to take the ownership of the HIV programme.”

He further said, “We have to give up our stereotype mindset and work united to fight the HIV menace. Today I am happy to see that more and more young people are taking part in seminars and all types of public discourse on HIV.”