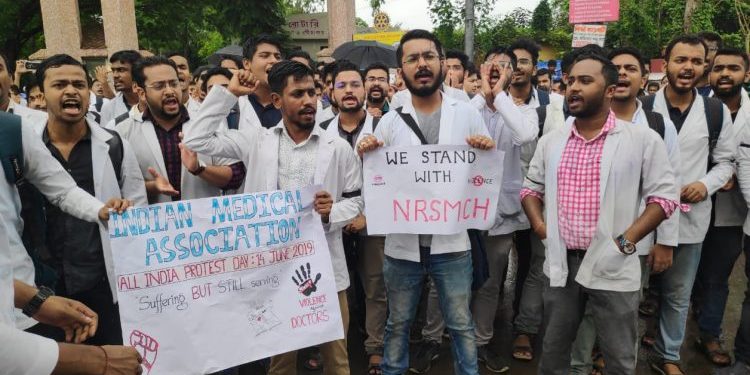 The medical fraternity of Assam on Monday joined the nationwide protest against the recent attack on doctors in West Bengal following which a young doctor Paribaha Mukherjee was critically injured.

The junior doctors of Gauhati Medical College and Hospital (GMCH) declared to join the nationwide protest called by the Indian Medical Association on Sunday.

Also read: OPDs of all govt hospitals to remain off on Monday in Tripura

The out-patient department services and routine operations will remain closed till 2pm on Monday.

However, emergency services will remain unaffected and will continue to function.

Arati Deka, a professor of GMCH informed that all the doctors of GMCH will launch a protest by wearing black badges from 11 am on Monday.

In order to condemn against the brutal attack on doctors at NRS Medical College and Hospital in Kolkata, the Indian Medical Association (IMA) headquarters has called for nation-wide 24 hour withdrawal of non-essential services closure of out-patient department services and routine operations from 6 am of June 17 to 6 am of June 18.

After the death of an elderly patient Mohammad Sayeed at NRS Medical College and Hospital on June 10, a huge mob began to brutally attack the doctors there by alleging that the patient died of medical negligence.