The programme will gradually cover 12 other districts, covering 42 schools, colleges and universities over a period of one week.

Another participative session at Gauhati University was presided over by Samir K Sinha, IAS, Principal Secretary, Finance Department while the programme at Royal Global University was chaired

This year, the Assam Government has taken a multi-dimensional approach to call for suggestions from citizens. Citizens can share their Budget ideas through assam.mygov.in platform and Finance Department website http://finance.assam.gov.in till February 16, 2018.

Assam Budget 2018-19 intends to propel the state in the realm of e-Budget, instead of the conventional paper-based one. 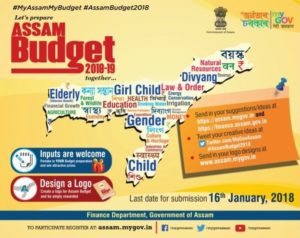 With this, Assam will join a handful of states that could successfully implement e-Budget.

Come March 2018, everybody across the State can access every bit of the Budget related information with just a click of the mouse or in their mobile handsets or tablets.

In another big change, which will be a boost to sectors, the Assam Budget 2018-19 will lay significant stress on girl child, differently abled and elderly, which will ensure empowerment, equality and a better life.