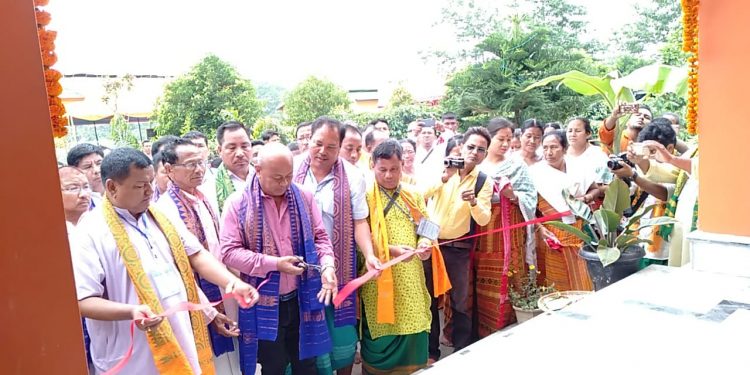 There is a clear mandate for BJP backed BPF candidate, Pramila Rani Brahma in Kokrajhar HPC and BPF backed BJP candidate in Mangaldoi HPC in the Lok Sabha polls 2019.

This observation was made by BTC supremo Hagrama Mohilary while exuding confidence that both the candidates will triumph in the two seats with landslide victory.

Mohilary said this on the sidelines of the inauguration of the Hirimba Bathou Thansali – a magnificient and eye-catching Bathaou temple at Chinakona village near Khoirabari in Udalguri district of Assam on Monday.

He further claimed that the saffron party under the able leadership of Prime Minister Narendra Modi would be voted back to power.

He further stated that Bathou is an ethnic religion followed by Bodos since time immemorial. He further informed that the BTC government has plans of establishing a number of such beautiful Bathou temples in other parts of BTAD.

The sixth annual Bathou Mahasabha was also held on the venue which was attended by of Bathou religious representatives from Meghalaya, Pasighat, Darjeeling, Alipurduar, Dimapur, Guwahati, Karb Anglong, Lakhimpur, Hojai, Golaghat, Dibrugarh among others.

Cultural troupes also performed traditional Rabha, Bodo, Sarania-Kachari, Tiwa and Bhutanese folk dances much to the amusement of the gathering.

Mention may be made that the construction works of ‘Hirimba Bathou Thansali’, at an estimate of Rs 300 lakhs, was initiated in 2012 under the initiative of executive member of BTC for Archaeology & Museum, PHE Lwmshrw Daimary as the president of the construction committee where the BTC authority has allotted a plot of 14 bighas of government land for the purpose.

The ‘Hirimba Bathou Thansali’ houses a guest house, a museum, a library and a community dining hall.

The main prayer hall of the mandir will accommodate 1000 devotees at a time for taking part in the community prayer while in the ‘Bibah Bhavan’ all followers of ‘Bathou’ religion will be able to solemnize their weddings. The entire complex has the facility of running water, synchronized sound system and uninterrupted power supply.

Mention may be made here that ‘Bathou’ is the ethnic religion of the Bodo or Kachari tribes and the followers of this religion offer their prayers in ‘Bathou Mandir.’ The name Ba means five and ‘thou’ means deep in Bodo language which reflects the five principles ie bar (air), orr (fire), ha (earth), dwi (water) and okhrang (ether) and these five principles were created by the chief deity ‘Bathoubwrai who is omnipresent, omniscient and omnipotent.