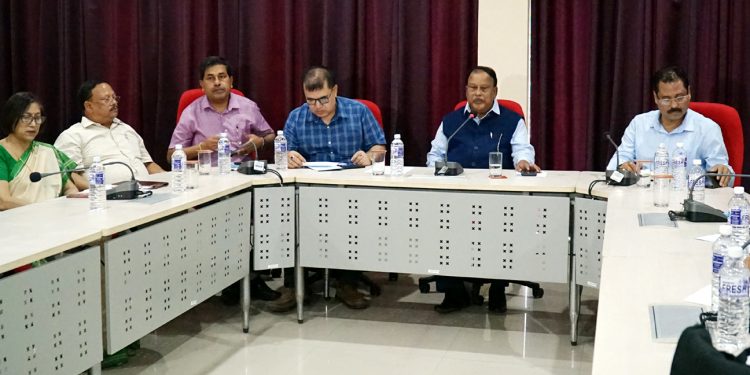 The 21st convocation of the Assam Agricultural University (AAU), Jorhat will be held at the Jorhat campus on May 4, which will be presided over by Assam governor Professor Jagdish Mukhi, the chancellor of the university.

Addressing media persons at the AAU campus at Jorhat, vice chancellor KM Bujarbaruah said Assam chief minister Sarbananda Sonowal will attend the function as the distinguished special guest and will deliver the convocation address and state agriculture minister Atul Bora will attend as the guest of honor.

Altogether 1426 students are eligible to be conferred various degrees under different faculties, out of which 951 are scheduled to receive degrees in the said function, the VC said.

Bujarbaruah informed that Doctor of Science (Honoris Causa) will be conferred on Dr Panjab Singh, president of National Academy of Agricultural Sciences and chancellor of RLV Agricultural University, Jhansi and Dhruba Jyoti Sharma, a well-known agripreneur from the state for his outstanding contribution in the field of agriculture.

Highlighting the achievements of the university and future programs, Bujarbaruah said that in the last 10 years, the number of colleges has increased from six to nine.

Two more new colleges – College of Forestry and Biodiversity at Kokilabari, Baksa under BTAD and Dairy Science College at Sorbhog – are coming up by next year-end. The VC said that another agriculture university in Barak Valley is also proposed to be set up at Silchar, the land for which has been selected by the deputy commissioner of Cachar.

The College of Community Science under the university will also launch a new four-year degree course on Nutrition and Dietetics from the next academic session in July.

Another highlight was the installation of a phytotron advanced facility which would enable the study of climate changes.

“The Rs 4 crore facility will help future research and will be placed at the site where the State Bank of India and post office, both will be shifted to new buildings elsewhere,” he said.

Another highlight was an agriculture museum which would depict the agrarian life of the region as well as display new and old equipment.

Bujarbaruah further said that the university which was in the red when he had taken over was now financially sound. The government had last year allotted Rs 380 crore in its budget and Rs 400 crore this year and an additional Rs 45 crore to clear the arrears, PF and salaries.