Assam: Goalpara municipal workers up in arms over unpaid dues

The municipal workers are on a strike for almost a week now; dumped garbage proving to be a health hazard for people 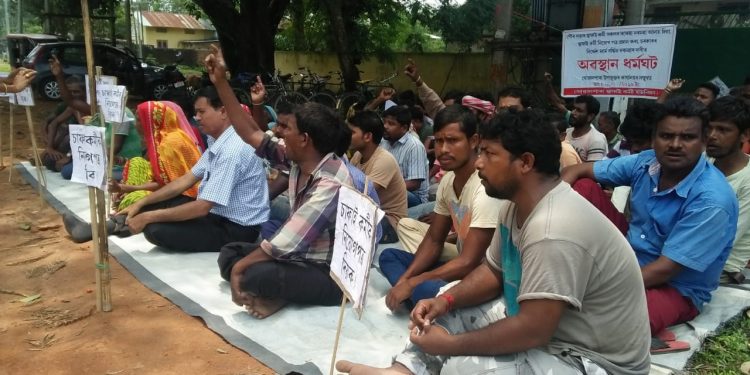 Goalpara town is making for an eyesore these days with garbage strewn all over the place.

The employees of Goalpara Municipality Board – which includes the cleaners – have gone on a strike demanding immediate release of their pending salaries.

The municipal employees staged a sit-in protest on Monday in front of the Goalpara deputy commissioner’s (DC) office and submitted a memorandum to the DC, Varnali Deka, containing a list of demands.

The municipal workers are seeing red over not being paid salaries for the last 11 months.

In the memorandum, they have also demanded that remuneration for casual workers be hiked as per labour law, issuance of appointment letters, workers cannot be terminated at the drop of a hat, and proper uniform as well as other accessories like mask, gloves and proper shoes for the cleaners be provided.

The normal work schedule of the municipal office in Goalpara has come to a grinding halt.

Talking to Northeast Now, Gopi Ghosh, vice-chairman of Goalpara Municipal Board, stated, “Due to the ongoing strike, the board has suspended Anower Hussain, a junior engineer and office-bearer of the GMB employees’ association.”

However, Anower Hussain denied receiving any such suspension order – “I haven’t received any such order though I was in the office campus the whole day.”

The board last week suspended Bhaskaraditya Roy, president of GMB employees’ association, for spearheading the strike.

Concerned citizens of Goalpara has demanded that the pending salaries of the municipal workers be released immediately as the dumped garbage all over the town is proving to be a big health hazard for the people.