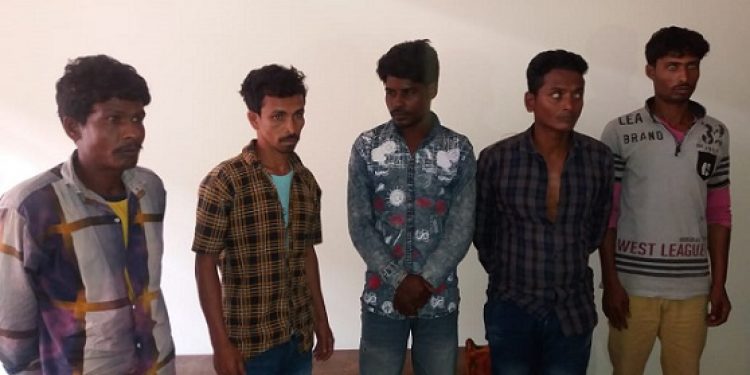 A night patrolling team of Mangaldai police station on Wednesday foiled a well-organized attempt of robbery when the police team netted a gang of notorious criminals in the heart of Mangaldai town in Darrang district.

Acting on a tip-off, a team of night patrolling team at around 3-30 am spotted a deep blue colour car (Swift Dzire) bearing registration number AS13G-7907 being parked suspiciously in a by-lane in front of the office of the deputy inspector of schools, Mangaldai with several passengers inside it.

Immediately conducting a search in the car, the police team led by officer-in-charge of the Town Branch of Mangaldai police station recovered several equipment including a ‘khukri’, specially-designed iron bars and torch light.

The gang smelling danger immediately tried to flee from the police dragnet but the police team caught hold five of them, but a couple of others managed to run away under the cover of darkness.

Later, during preliminary interrogation, they reportedly confessed before police that they were about to implement a plan of robbery in the township.

Meanwhile, talking to Northeast Now, superintendent of police, Darrang, Amrit Bhuyan said a serious crime could be averted with the arrest of the notorious criminals.

“It is suspected that this notorious gang is involved in several cases of crime including robbery, looting in commercial establishments and households in recent times. Interrogations are on to ascertain the truth,” superintendent of police Bhuyan asserted.

Among the arrested five accused, two each are from two areas falling under Mangaldai and Dhula Police Stations while the other is from an area falling under Dalgaon police station in Darrang district.