In several parts of the town, locals and citizens' groups took out processions carrying the Indian tricolour 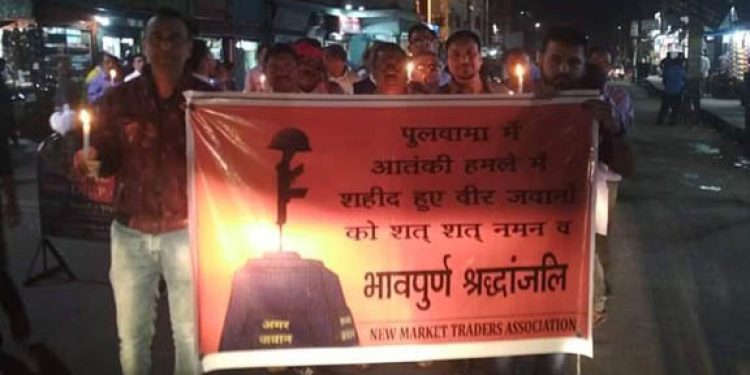 A candle light procession being taken out in protest against Pulwama terror attack. Image - Northeast Now

The business community observed a spontaneous shutdown in Dibrugarh on Saturday in protest against the Pulwama terror attack in Jammu and Kashmir that claimed lives of 44 CRPF jawans including Assam’s Maneshwar Basumatary.

All business establishments, shops, markets, hotels in the town downed their shutters and closed daily business to pay homage to the martyred jawans, who were killed in a suicide attack by Pakistan-based Jaish-e-Mohammed (JeM).

In several parts of the town, locals and citizens’ groups took out processions carrying the Indian tricolour to show solidarity with the nation and families of the martyrs.

Slogans were raised against Pakistan for the dastardly attack and there were demands of strict action against Islamabad for harbouring terrorists and using them to carry out terror attacks against India.

In several educational institutions of the town, students and teachers offered prayers and homage to the slain soldiers.

In the evening, a candlelight procession was taken out jointly by several organisations and local public across the town.

They later converged at Thana Chariali area of the town and paid floral tributes to the slain jawans.

This was the biggest attack since the Uri Army camp strike of September 18, 2016, following which surgical strikes were conducted in Pakistan-occupied Kashmir.

The terrorists targeted a CRPF convoy, which was moving from Jammu to Srinagar.

Meanwhile, the mortal remains of the Central Reserve Police Force (CRPF) jawan, Maneshwar Basumatary (47), who died during Pulwama attack in Jammu & Kashmir, landed at the Borjhar-based Air Force Station in Guwahati in the evening on Saturday.

Later, the martyred jawna’s body was taken to his home town for the last rites.