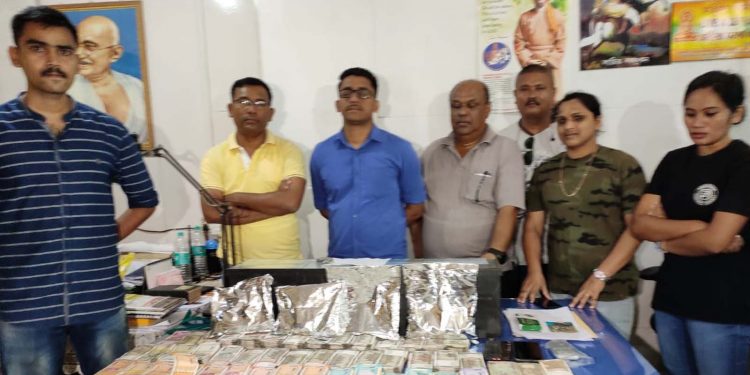 Dibrugarh Police on Sunday seized a 1.14 kg of suspected brown sugar from Kalibari area of Dibrugarh town along with a cash amount of Rs 19.55 lakh.

Police said this is one of the biggest drug hauls in Upper Assam.

The estimated value of the seized contraband drugs is said to be around Rs 70 lakh in the market.

According to information, the raid was carried out by a police team led by Dibrugarh Additional Superintendent of Police Dhruba Bora in Kailibari area at 3 am.

The police managed to recover the drugs which were kept neatly packed in silver foils.

However, the drugs dealer and the owner of the house, identified as Raja Ali, managed to escape by jumping from the first floor of the building.

Ali’s wife Husna Begum was taken into the custody of the police.

A case has been registered against Ali and his wife at the Dibrugarh Police Station under the Narcotic Drugs and Psychotropic Substances (NDPS) Act, 1985.

“Today’s seizure was one of the biggest such hauls in recent times. We are investigating into the trail of the seized drugs,” the police official said.

Under the leadership of DySP LO, DSP HQ & OC Dibrugarh,a search operation was conducted at Kalibari area.1.14 kg suspected brown sugar,cash Rs.19,55,930/- & 2 nos of mobile handsets have been seized from the house of Raja Ali of Kalibari.#DibrugarhPoliceOneTeam @assampolice pic.twitter.com/JPwFGZs5bn

“Unfortunately, the kingpin of the drug racket managed to flee. He will be in our custody very soon along with several drug peddlers,” he added.

Bora also informed that they had received information about Raja Ali doing business of drugs and supplying drugs in Upper Assam and Arunachal Pradesh.

“We started the operation and seized the drugs from his residence. We will continue our drive against drugs in Dibrugarh. Very soon, we will manage to arrest the notorious drug dealer, Raja Ali,” Bora further said.

Ali, who is a trusted henchman of Elahi, has allegedly been running the narcotics racket on behalf of his boss, who is currently in jail.

Sources said, Raja Ali has engaged several youths as drug peddlers in Upper Assam areas and neighbouring Arunachal Pradesh as there has been a growing demand of drugs in the region.