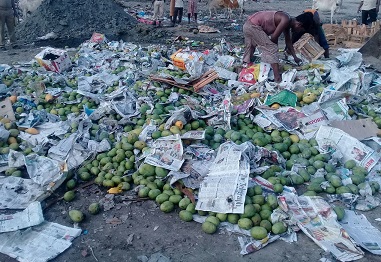 Acting on a tip-off, the Dhubri district administration on Friday conducted raids in different fruit godowns located at NS Road of Dhubri town and destroyed a huge quantity of mangoes worth over Rs 1,50,000 following the seizure procedure for being contaminated by artificial ripening agent, calcium carbide.

A joint team, led by executive magistrate of Dhubri, Chanta Chetri, accompanied by Nayan Kr Das, food safety officer under the Health Department, police and official of Dhubri Municipal Board, conducted the operation.

Chanta Chetri, executive magistrate of Dhubri told Northeast Now that the district administration got information that few traders were rampantly using calcium carbide, a hazardous chemical used for artificial ripening of fruits like mango and banana.

Although, Friday’s drive was focused only on mango, however, a similar drive against traders of banana would also be conducted in due course of time, added Chetri.

Nayan Kr Das, food safety officer, Dhubri said calcium carbide is banned under the Food Safety and Standards Regulation as it is harmful for health, but it is widely used by fruit merchants.

Adding further, Das said that the department has also collected samples of seized mangoes and these would be sent to Guwahati-based laboratory for checking and legal action would be taken against the traders if it was found beyond permissible limit.

Experts say that calcium carbide is used to generate low levels of ethylene gas, which can hasten the ripening of fruits like banana, mango and papaya. Consumption of artificially ripened fruits causes stomach upset because the alkaline substance is an irritant that erodes the tissue in the stomach and disrupts intestinal function.

But the fruit traders have been rampantly using carbide to give the mangoes and bananas a bright-yellow look and have a longer shelf life which is very dangerous for health.

The seized fruits were loaded in municipal board trucks and were sent to the Mela Maidan which has been used as a dumping ground and where all mangoes were decomposed accordingly.

In Dhubri, nearly 80 per cent good quality mangoes are transported from other States like West Bengal, Bihar and Uttar Pradesh.