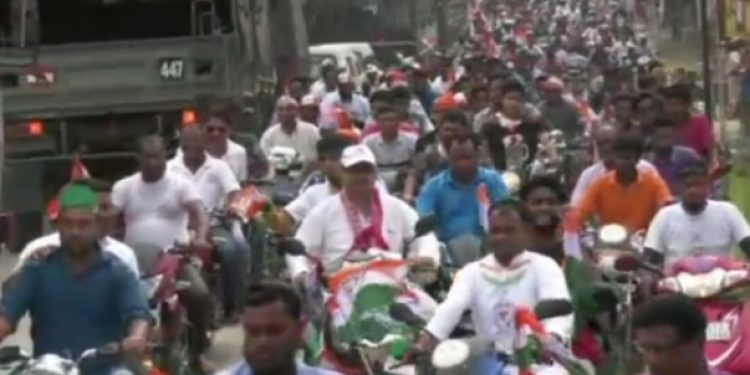 On the last day of campaigning for the second phase of polling, the Indian National Congress (INC) on Tuesday took out a mammoth bike rally across Darrang district of Assam in support of party candidate for 8 Mangaldoi HPC, Bhubaneswar Kalita.

The rally which started at Narikoli in Sipajhar along the National Highway 15 and ended at Kharupetia touching Mangaldai was led by Assam Pradesh Congress Committee (APCC) president Ripun Bora in presence of party candidate Bhubaneswar Kalita himself.

The Congress supporters participating in the the rally waved party flags and shouted slogans against the ruling BJP and in support of Congress party and its candidate Bhubaneswar Kalita.

Later talking to the media Kalita claimed that he is confident enough that voters will support him to clinch the Lok Sabha seat from the BJP after three consecutive terms of 15 years as people are fed up with the repeated failures of the BJP parliamentarians.

Polling for the Mangaldai Lok Sabha constituency will be held on Thursday.

The seat has been occupied by the BJP for three the three last consecutive terms.