Several factors like CAB, AIUDF not fielding candidates, displeasure among Nepali community and absence of ABSU and NDFB (P) support detrimental for BJP 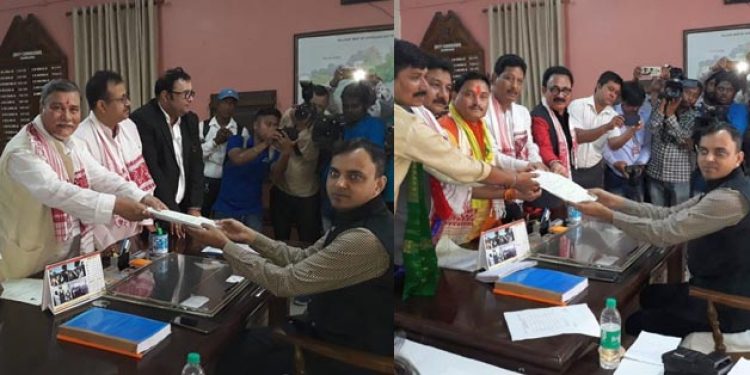 The election campaigning for Lok Sabha poll 2019 has been going on in full swing in all the four LAC segments in Udalguri district, namely 64 Paneri, 65 Kalaigaon, 69 Udalguri and 70 Mazbat under Mangaldai parliamentary constituency of Assam.

Veteran Congress leader and sitting Rajya Sabha MP, Bhubaneswar Kalita, who is the party candidate for the constituency, has been visiting all the LAC segments in Udalguri district over the last couple of days.

Moreover, last time ABSU and NDFB (P) support had helped BJP to defeat Congress. But this time, ABSU, NDFB (P)  has extended its support to UPPL candidate Prodeep Kumar Daimari who is likely to cause much trouble for the BJP as has been opinion of senior political analysts.

On the other hand, the Gorkha population living in Udalguri district too are unhappy with the BJP for denying ticket to Ram Prasad Sarmah in Tezpur.

If inside sources of Congress are to be believed there has been even absence of dissidents among Congress leaders of Mangaldai who were in fray for tickets this time, prominently Madhob Rajbongshi and Dipankar Saharia. This is another interesting bonus point for Bhubaneswar Kalita.

The CAB factor will also benefit Congress in the constituency. While attending a huge election rally at Lakhimpur village near Kalaigaon in Udalguri district on March 30, Congress candidate of Mangaldai, Bhubaneswar Kalita appealed to the people to vote for the Congress for communal harmony. He further said that he had been representing the people of Assam in the Lok Sabha and Rajya Sabha for many decades with a clean image.

State Congress president Ripun Bora while attending the rally spoke on internal party politics of BJP president and Prime Minister to divide Indians on religious lines for the interest of their corporate friends. According to him, it was Congress which had fought the Citizenship (Amendment) Bill, 2016 in the Rajya Sabha in the interest of Assamese identity.

Congress leader and former MLA of Kalaigaon LAC Mukunda Ram Choudhury also accompanied Bhubaneswar Kalita in the rally. Earlier in the day, Kalita met senior citizens and other leading people of Kalaigaon at Pragatisil Gana Manch, Kalaigaon and sought their support and advice.