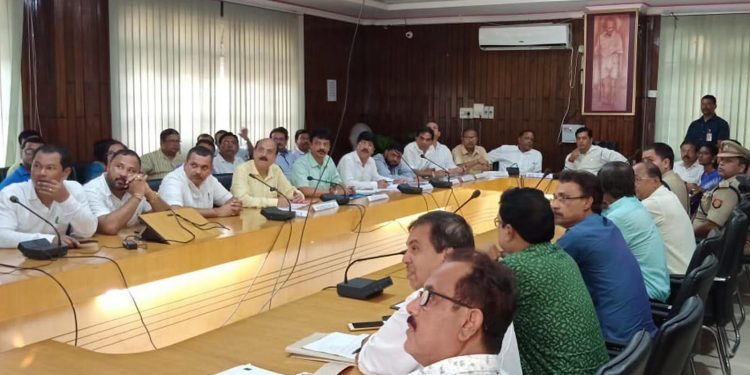 Assam Chief Minister Sarbananda Sonowal on Wednesday visited the flood affected areas of Barak Valley, and assured all possible help to the people.

The CM took an aerial view of the flood affected areas of Hailakandi, Karimganj and Cachar districts in a helicopter.

At first, the CM landed at Karimganj, and visited relief camps located at NNTC RME School and Govt Boys HS School. He had a review meeting with the authorities of the district administration.

At the review meeting, Sonowal took stock of the relief works, and got a briefing on the weak embankments that can pose a threat in case of more rainfall.

The CM directed the officials of Karimganj district administration to ensure rescue and rehabilitation of the flood victims.

Sonowal told the administration to be careful about the post flood outbreaks of various infectious diseases. He instructed the health officials to conduct medical camps on a regular basis.

In Silchar, the CM visited the Malini Beel, the worst affected area. He met the flood victims who are now lodged in a market shed.

Sonowal took a stock of the relief distribution to the flood victims and expressed his satisfaction with the works of the Cachar district administration, especially the deputy commissioner, Laya Madduri.

Cachar and Hailakandi districts’ Deputy Commissioners, Laya Madduri and Keerti Jalli, apprised the CM about the measures being undertaken to tackle flood in their respective districts.

Briefing the media post his hour long review meeting, Sarbananda Sonowal, said, “I am happy that a sum of Rs 251 crores has been extended to us for which I am indebted to our Prime Minister Narendra Modi.”

The Niti Ayog following instructions from the PMO would set up a committee soon at a national level, and a comprehensive report would be prepared, he said.