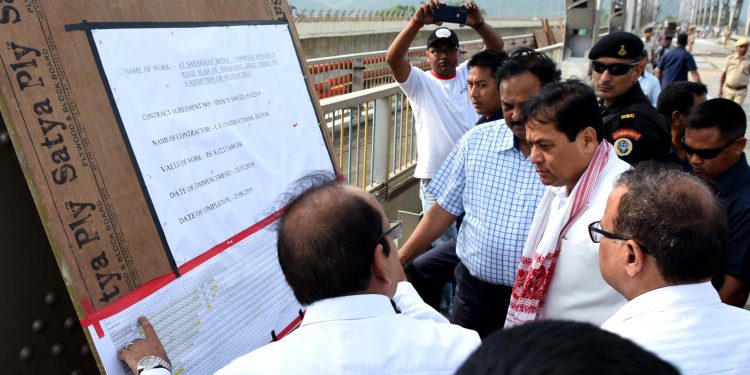 Chief minister Sonowal, who took stock of the progress of   repair work on Monday, asked the Railways to engage manpower in three shifts and complete the casting work of the bridge by May 15, said a statement issued from CMO.

“The Saraighat bridge is a lifeline in terms of connectivity for the people of North and South bank of river Brahmaputra. It is very important to complete the repairing at the earliest to ensure hassle free traffic movement for the people of both banks of the river,” Sonowal said to the railway officials.

Stating Saraighat as a major connectivity link, he further directed to complete the repair works within June 20 instead of June 30 as fixed earlier by the Railways.

The chief minister further asked the railways to finish casting of the bridge within May 15 so that the bridge could be reopened for vehicular movement on June 20.

Further, considering the amount of repair work to be executed, Sonowal advised the Railways to engage manpower in three shifts ensuring round the clock work instead of present two shifts.

NF Railway general manager Sanjive Roy informed the chief minister that it is for the first time a major repair of this scale has been taken up since the time of dedication of the bridge to the service of the people in 1963.

He assured the chief minister to complete the repair work within June 20 as directed by him. The Railway personnel also briefed him about the project in detail at the work site.