Assam Chief Minister Sarbananda Sonowal who is on a visit to Singapore met Singapore Minister for Foreign Affairs Vivian Balakrishnan in the side-lines of the two-day ASEAN-India Pravasi Bharatiya Divas in Singapore.

Over 2,500 delegates attended the programme, which was held for the first time in Singapore.

The India-Singapore/ASEAN Entrepreneurship Bridge (InSpreneur) was also held on January 5 and 6, on the second day, co-terminus with the PBD which was also attended by Sonowal and Swaraj.

In addition to panel discussions, start-ups provided an opportunity to pitch to investors and interact with other start-ups in curated ‘speed dating’ sessions.

The event culminated in the launch of the India- Singapore/ASEAN start up portal. 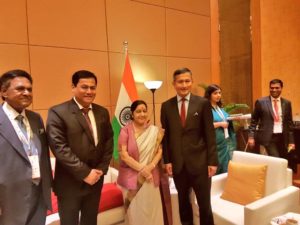 Around 600 invited delegates, including 300 curated start -ups, with around 120 from India, participated in the event.

The event is supported by Singapore’s Ministry of Trade and Industry and India’s the Department of Industrial Policy & Promotion (DIPP), Invest India, the Confederation of Indian Industry (CII), the Federation of Indian Chambers of Commerce & Industry (FICCI) and the National Association of Software and Services Companies (NASSCOM).

Fintech is emerging as an exciting new area of collaboration – both at regulatory and promotional levels.

The launch of the India-Singapore startup portal, anchored in startup India, will become a channel for pursuing these objectives on a sustained basis. 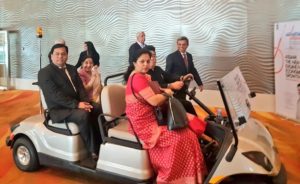 The PBD also commemorates 25 years of ASEAN-India Partnership, ahead of the Commemorative Summit on January 25- 26.

The event also showcased Indian Diaspora’s talent and achievements and deepen their – especially the youth’s – emotional and economic links with India.