The organisations are busy at showing their power - who has how many number of supporting organisations: Rupam Goswami 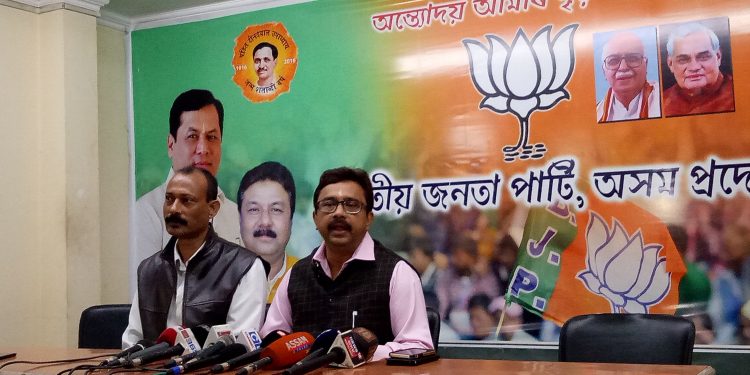 Assam BJP spokesperson Rupam Goswami on Monday lashed at the various organisations which have continued agitation demanding scrapping of the Citizenship (Amendment) Bill, 2016 and termed the stir as ‘worthless’.

It may be mentioned that most of the political parties and organisations in the Brahmaputra Valley of Assam representing various ethnic groups have been demanding withdrawal of the Bill.

Goswami while speaking to reporters during a press conference here on Monday said: “Shouting on the streets and playing with emotion of the public will not work here. People need to understand the matter.”

Lashing out at Krishak Mukti Sangram Samiti (KMSS) advisor Akhil Gogoi, Goswami said, “Some people always try to hamper the progress of the State by mobilising the public playing with their sentiments against the Government with vested interests.”

Goswami also said the organisations should have actively participated in the claims and objection process of the NRC.

“But, they are busy at showing their power – who has how many number of supporting organisations – and shouting on the streets demanding scrapping of the Bill,” Goswami said.

It is to be noted that while on the one hand, All Assam Students’ Union (AASU) and 28 other organisations have been protesting against the BJP-led Central Government’s move to implement the Citizenship (Amendment) Bill, 2016 besides demand an error-free NRC, on the other hand, 70 organisations including KMSS have also raised voice against the Bill.

Goswami claimed that the law and order situation in the State has improved at a time when unidentified armed men gunned down five innocent people from a particular community at Kherbari in Dhola-Sadiya of Tinsukia district on November 1 and many youths have joined the banned outfit organisation United Liberation of Asom-Independent (ULFA-I).

Moreover, talking about the Assam Public Service Commission (APSC) 2016 examination results that were declared on Friday last, Goswami claimed ‘it was corruption free’.

“It was a transparent process. Nobody can point out any discrepancies. Even the candidates themselves said it,” Goswami said.

He also challenged former Assam Chief Minister and senior Congress leader Tarun Gogoi to publicly tell whether he was responsible or not in the APSC cash-for-job scam.