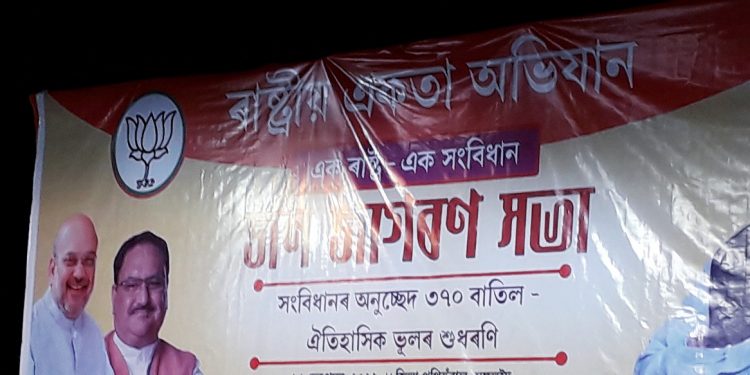 The State BJP chief was addressing a meeting of the party workers ‘Jan Jagaran Sabha’ in Mangaldai.

The meeting which was part of its national unity mission was held at the district library auditorium.

Claiming the government’s decision to abort the Article 370 and Article 35 (a) of the Constitution as a ‘correction of a historical fault’, president Dass in his speech tried to justify his claim by explaining about the responds shown by different communities residing in Jammu and Kashmir including the Buddhists and Muslims.

He also referred to the claims of a section of intellectuals of the State regarding next hidden agenda of the saffron party to abort the Article 371 which allows the provision of the prevailing inner line permit in some of the other states of the Northeast like Arunachal Pradesh, Nagaland etc.

The State BJP chief ruled out any such hidden agenda of the party in power as clarified by the union home minister Amit Shah in a meeting with the chief ministers of all the north-eastern states during his recent visit.

He also appealed to the party workers to leave behind the thoughts of the regionalism and whole heartedly accept the ideology of nationalism.

The meeting over crowded by its party leaders and workers across the Mangaldai Lok Sabha territory was also attended by several senior party leaders including state revenue and irrigation minister Bhabesh Kalita, parliamentarian of Mangaldai Dilip Saikia , legislators of Mangaldai and Nalbari, Gurujyoti Das and Ashok Sarma respectively,

The function organized synchronizing the birth anniversary of Deen Dayal Upaddhay has drawn attention of the conscious circle to the spelling mistake of the Assamese word ‘Bhul’-wrong which was visible in all the banners and posters that have been erected in the main dais and the surroundings of the venue .