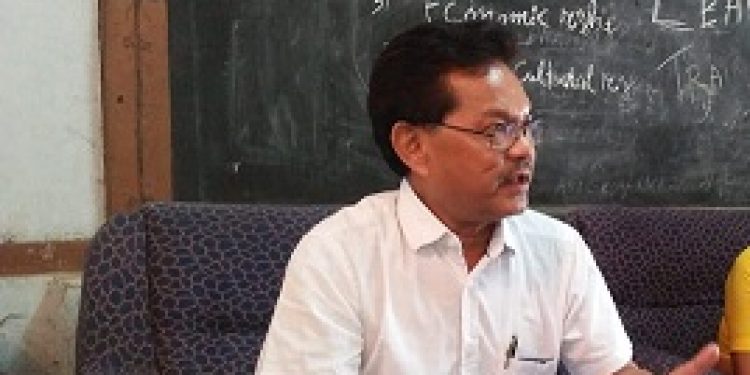 Fiercely protesting against the move of the Bharatiya Janata Party (BJP)-led Government to confer Scheduled Tribe (Hills) ST(H) status to the Bodos residing in the hill districts of Assam, the Autonomous State Demand Committee (ASDC) staged a protest march and road blockade in Diphu on Monday.

The ASDC demanded that the decision to confer ST (H) status to the Bodos be revoked pronto. A large number of people participated in the protest march and the road in front of Semson Sing Ingti Memorial Park was blocked from 11 am to 2 pm on Monday. Slogans like – ‘Let’s Make the Movement Stronger’, ‘No ST (H) Status to Bodos’ rent the air and the leaders of ASDC were present at the protest march.

The president of ASDC and former minister Holiram Terang, while talking to media persons at the protest march venue, said that the “move of the BJP-led Assam Government will not be tolerated”. He further stated, “A single community enjoying twin benefits exist nowhere in India. If the Bodos were accorded ST (H) status, they would automatically get benefits in Government jobs and educational institutions. We will let our view be known to the Minister of Tribal Affairs Jual Oram. The other hill tribes in Karbi Anglong and West Karbi Anglong are totally backing us. In case, the Government is not prepared to lend an ear to us, we will go in for a full-fledged agitation.”

A memorandum was submitted to Jual Oram through the district administration which was received at the protest venue by a magistrate. The memorandum stated that “Anthropologically, they (Bodos) do not come under the Hill Tribe category and they are not indigenous to the hills. Including the Bodo Kacharis in the Scheduled Tribe list meant for the Hill Tribe will be fraud on the Constitution. Moreover, this action will gradually exterminate the already marginalised Hill Tribes like – Karbi, Dimasa, Garo, Hmar, Kukis, Thadou, Khasi, Jaintia, Man (Tai-speaking, Hrangkhawl, Biate, Paite, Chakma/Reang and Naga, etc.”

Further, the memorandum stated that, “Every community or tribe has all the rights to have legitimate status in the polity but that should not be at the cost of other communities or tribes. This attempt to grant ST-Hills status to Bodos will definitely have socio-political-economic and demographic implications which would ultimately wipe out the ethnic hill people. Therefore, the Union Government’s attempt once again, despite united opposition by the Hill Tribes, is a complete disregard to the indigenous people’s legitimate right to protest and promote their identity and culture. A serious injustice would be done to the Hill Tribes if the Constitution (Scheduled Tribes) Order, 1950, is amended to confer non-indigenous people as Hill Tribe.”