Assam and Mizoram footballers in 29-man squad for preparatory camp 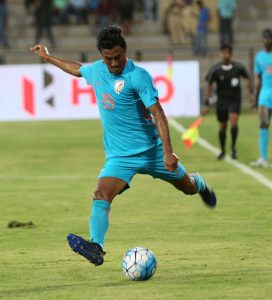 Assam’s Halicharan Narzary and Vinit Rai, while Mizoram’s Jerry Lalrinzuala and Lallianzuala Chhangte have been named in the 29-member Indian football squad for preparatory camp ahead of their FIFA World Cup 2022 qualifiers match against Bangladesh.

While Rai, Narzary and Chhangte have been selected as midfielders, Lalrinzuala has been named among the defenders of the Indian football team.

India will play against Bangladesh on October 15 next.

Apart from the three footballers of the Northeast, the other players who have been chosen as midfielders include Udanta Singh, Nikhil Poojary, Anirudh Thapa, Abdul Sahal, Raynier Fernandes, Brandon Fernandes and Ashique Kuruniyan.

It may be mentioned that India faced a 1-2 defeat in the FIFA 2022 World Cup qualifier match played at Indira Gandhi Athletic Stadium at Sarusajai in Guwahati on September 5.

However, India managed a goal less draw against Qatar on September 10.